I had my first Mother's Day on Sunday and it was nice. I hope all you other moms out there had a great day. John and Olivia gave me some flowers, very nice cards, and a gift certificate for a massage, manicure and pedicure. I'm very excited for that! On Friday, when I went to pick Olivia up from day care, they had a gift for me too. It is now on our fridge. Pictures are below. 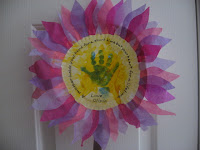 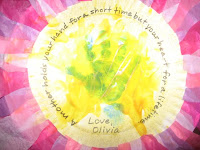 Last week our little scooter decided she wanted to crawl as well. I don't know what did it but she now crawls at times, though she is not nearly as fast as when she scoots. She is getting really good at sitting up from laying down and we find her sitting in her crib looking through the slats all the time. It's like she's a little jailbird. I really do need to get a picture of it. As her hair gets longer it gets more and more crazy. I just couldn't pass up the chance to get some pictures of her crazy hair after a nap one day. 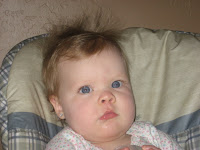 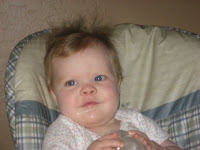 Olivia loves to be my little helper and one day I'm sure I will pass off many duties to her (I can't wait!). Below are pictures of her helping me "sort" the laundry. Apparently I don't do it right so she is redoing it for me. 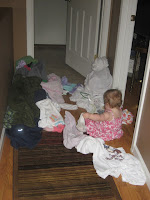 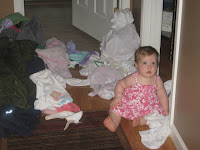 Unfortunately O got sick over the weekend. I don't know if it's from the new day care or the water fountain/playground a friend and I took her to on Friday, but I'm thinking it's the day care. I'm not really surprised that she got sick since it's a new place with kids she'd never been around before. She kind of felt warm Friday night and Saturday, but then she woke up Saturday night at about 12:15 a.m. and when I took her temperature it was about 100 degrees. This continued through Sunday and she also had a sore throat (she would cry every time she coughed - poor thing) and something in my gut told me I should take her to the doctor. So I worked a little bit from home on Monday and took her to the doctor where they told me she has strep. Strep! Usually kids don't get that until they are at least past 1 year of age. She's on antibiotics once again. I stayed home again on Tuesday and it was an extremely rough day. O was very fussy, and though she isn't having a problem sleeping, she still doesn't seem to get enough time in bed, but when you try to put her down she screams. It was not a good day. Poor John came home to two people crying.
I'm busy planning O's 1st birthday party on June 13th. We were going to do it on June 6th but we're not sure if my dad is going to be in town. We figured there is a better likelihood he'll be in the country on the 13th, so we're doing it then. It's going to be a ball party because she loves any type of ball - soft, baseball, koosh - it doesn't matter. I'm going to make her a smash cake and I hope she really gets into it. It's going to be great! I can't believe she is almost 1 already!