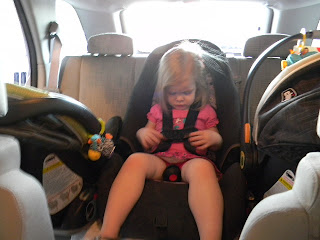 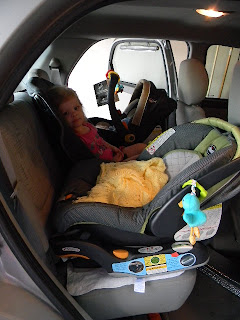 But with babies in the car seats parked in some random parking lot and me where Olivia is.  Can you see it?

That's exactly what took place last week not 45 minutes after I had dropped my mom at the airport so that she could go home after being here helping for a little over a month.  I ran into my first test without help after stopping at Sonic for a drink (gotta love their happy hour).

By the time I left Sonic both boys were screaming.  I thought I could make it home.  Not so much.

I pulled over into a random Napa Auto Parts parking lot, climbed into the back seat and fed the boys at the same time.  This was after taking both of them out of their seats to try to calm them (obviously it didn't work).  Ah, the life of a mom of twins.

But we survived and I've only had a couple other instances of them both being hungry at the same time and really screaming about it.  So I've been lucky.

The boys turned one month old last Thursday.  The time has flown by for the most part, though some days it seems like forever ago that I had them.  Those are mainly days when the night was a long one!  Their one month check-up is on Wednesday so I will update weights, etc. then.
Posted by J, B, O, J & Z at 2:16 PM 1 comment:

The day that I finally delivered my boys.  Yes, it was supposed to be February 16th but due to there not being enough beds when I called they pushed me back.  And back.  And back.  I ended up going in 21 hours after my original induction time.  Here I am Wednesday evening prior to heading into the hospital. 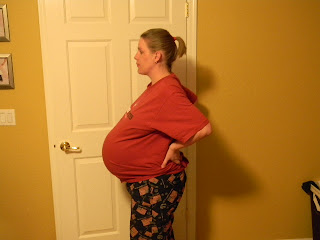 The previous 6 or so days had not been good ones.  I had pretty much put myself on bedrest as I've written about before.  I was in pain, couldn't walk far, couldn't breathe well and I was most comfortable sleeping on the couch.  John was lucky to have the whole bed to himself for several nights and was able to get some good night sleeps before our long night in the hospital.  My parents came in the evening of the 14th and were a God send taking care of Olivia and cooking dinner (my mom is still here cleaning my house and making sure everyone is fed - I don't know what I'd do without her!).
We checked in at midnight on Wednesday night/Thursday morning putting me at 39 weeks and 1 day.  My nurse was awesome.  Softball player who played the same position that I did and we share the same birthday.  She also played college ball with a girl I played high school ball with.  Small world.  Needless to say she and I got along really well which was nice.  She got me on my IV and my doctor came in to check if both boys were still head down.  I thought that Baby B had flipped but he hadn't.  When I was checked I hadn't progressed from my 36 week check-up - I was still 1 cm dilated and soft but not effaced.  Who knows how long these boys would have stayed in!

I did try to sleep but really couldn't with everyone in and out of the room checking monitors because the boys wouldn't stay on and the contractions getting increasingly uncomfortable.  By about 5 a.m. I had progressed to 3 cm and was given the epidural.  I realize now how much I don't remember about my first delivery with Olivia because of the Stadol I was given before my epidural that time around.  Everything is much more vivid this time around and the epidural, while still not a big deal, wasn't as easy as it was last time.

Between the epidural and being checked again around 6:30 a.m. (by my new nurse - also awesome) I went from 3 to 7 cm.  Cool.  Going well.  Around 8 a.m. I was 7-8 cm but not effacing like they wanted me to.  They put me on oxygen and put a birthing ball that was shaped like a bean under my right leg and had me roll a little to my left side.  Within about 20-30 minutes I was feeling a ton of pressure and when they checked I was complete and baby A had come way down.

So off to the OR.

After prepping for a while I was finally able to push.  It was highly uncomfortable just laying there with a baby ready to come out.  At least I had had the epidural and it wasn't too painful.

Once everything was finally ready to go, two contractions and 6 pushes later Jacob Ryan was born at 9:15 a.m. weighing 7'15" and measuring 21" in length.  This is where things got tricky. 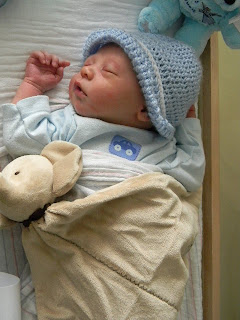 Jake screamed like crazy so I knew he was fine.  John wasn't really able to get any pictures of him on the scale because they don't have the scales in the OR and he wasn't going to leave with Baby B still not born.  So once they took Jake to be cleaned up and checked out we kind of hunkered down to wait on B.
What they explained to me at that point was that B's heart rate had been going down with every contraction and wasn't going back up to a level they wanted so they kept me on oxygen to help him out and gave me a few more contractions to see if he'd move down far enough to be able to push him out quickly and maybe with the help of the vacuum.

Unfortunately he didn't move down far enough for their liking and his heart rate didn't come up high enough either so my doctor recommended a C-section to get him out.  I consented (and had already signed the form in L&D so they prepped me really quickly and in less than 5 minutes Zachary Thomas entered the world at 9:48 a.m. at 7'3" and 20.5" in length.  John told me that he was blue when he came out and that they had to use oxygen on him.  It took him about 30 seconds to start crying but once he did he pinked right up and hasn't had a problem since. 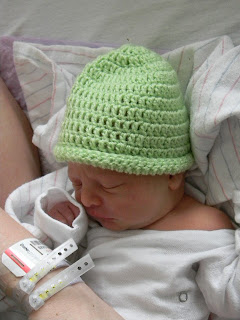 My labor lasted a little over 8 hours this time and it flew by.  The 12 hours that I labored with Olivia dragged so I'm glad this time was better.

I was closed and cleaned up and out of the OR by 10:20 a.m.  Both boys came straight to recovery with me with no time in NICU.  Only a slight amount of jaundice in both of them was noticed but nothing to warrant any special treatment. 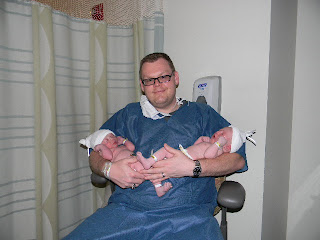 Once I was moved to my postpartum room and was comfortable we called my parents and had them bring Olivia to meet her brothers.  She was excited to see them and brought them some balloons but after about 10 minutes she said she was ready to go home.  Since then she has really taken to them.  She gives them kisses all the time and many mornings they only way I can get her to get up and get dressed for daycare is to tell her she has to be dressed before she can see her brothers.  Whatever works, right? 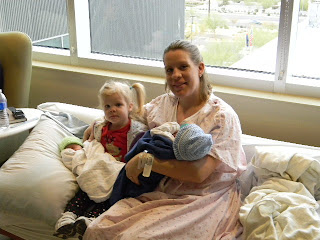 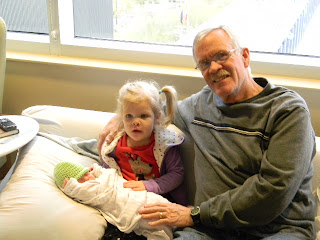 Recovery this time around has been much easier that it was with Olivia.  I attribute it to the fact that I was on meds this time around and I knew kind of what to expect with newborns.  The babies have gone easy on me too.  They rarely cry and I've had a ton of help with feedings at night which allows me a few extra minutes of sleep here and there.  John has taken over a lot of the care of Olivia which takes a load off me and she seems to be okay with it too.

The boys were circumcised on Monday and have recovered well from that.  At their post-circ check-up Jake weighed in at 9'3.5" and Zach was 8'2" so I have a couple of loads on my hands.  Eating is not a problem for them though it can be a little rough on mom! 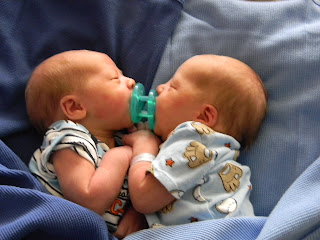 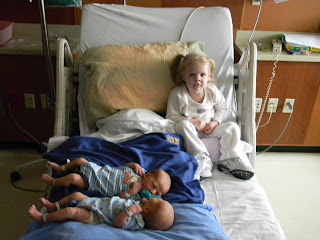 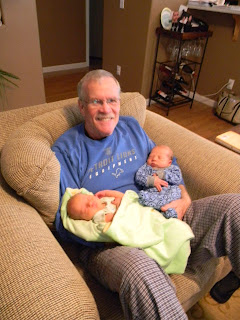 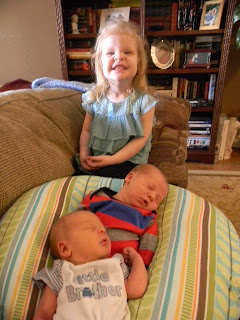 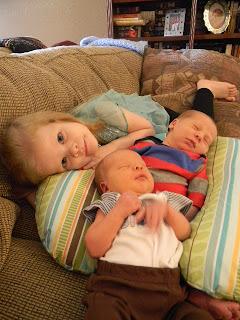 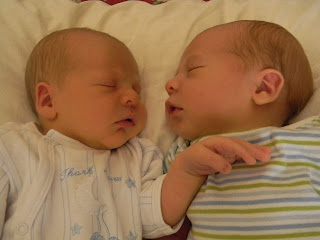 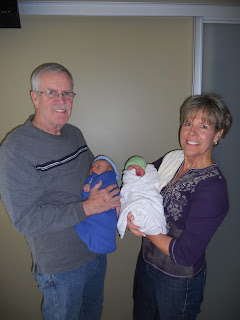 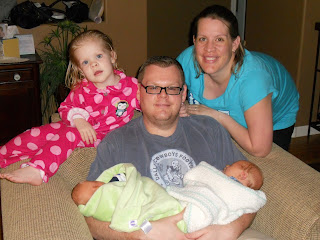 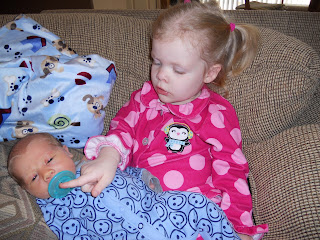 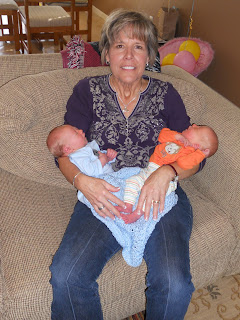