Just one of them days

Actually, it's just one of them two days.

We got our water bill from the city a couple of weeks ago and when I FINALLY looked at it, just a couple days before it was due, I realized that it was higher than normal.

I immediately called our city's finance department to see what was up.  They were very nice about it and said they would transfer me to the water department because it is possible there was a leak and that's what made it go up.  One transfer later, and another very nice lady, I am on the schedule to have a water technician come out and check our meter.

But they said it could take a week to get that done.  In the meantime I'm thinking that if there is a leak I don't want it to get worse and the ceiling come down on one of my kids.  Even though we haven't noticed any sort of water damage anywhere.

So I call a plumber yesterday.  They are going to send someone out today between 8 a.m. and noon.  Fine.  I work from home today so no big deal.

Get home from work last night and I walk into an 86 degree house.  What the?!  The A/C is blowing but not cooling.  Son of a bitch!  That's just what we need.

So I call the A/C company we've used in the past and someone was here within an hour.  The guy is great.  Does all his little stuff to figure out what is wrong including climbing into the attic.  Turns out our motor is shot and the drains need to be cleaned.

Of course the manufacturer, Carrier, makes their A/Cs as difficult as possible to get into and needing a special motor.  But we need it fixed.  You can't live in Phoenix without an A/C.  Not gonna happen.

Well, the guy can fix it but it won't happen until today.  What to do then?

Pack the kiddos up and head to a hotel.  No way are we staying in the house with a 3 year old, two 5 month olds and nothing but fans to blow around hot air.

Luckily there is a hotel close and I had a $100 off a repair for the A/C so essentially our room was free.

That's about as far as our luck goes although the plumber got here and discovered that there was in fact a leak but only in our drip system.  I am so glad it wasn't something in the walls, ceiling, or under the concrete which he said it could have been.

They say bad things come in 3's.  I'm hoping the third one decides to skip over us.  We really don't need it!

On a positive note, the kids did awesome in the hotel.  The boys shared a sofabed and didn't roll all over each other.  John got his own bed and I shared with Olivia.   When we were leaving this morning Liv told us that she wants to go to that hotel again.  I said that I hope we don't ever have to stay there again.  Keep your fingers crossed!
Posted by J, B, O, J & Z at 8:39 AM 1 comment:

My Aunt Manny and cousin Kristen came out to visit a couple of weeks ago.  My family is awesome!  This is the second of my aunt's (and first cousin) to come out since the boys were born to help out with housework and cooking because Lord knows it's not getting done that well without some help.  =)
We had a lot of fun with them and they did an incredible job of (along with my mom) cleaning my entire house and cooking some delicious food.  I am so incredibly thankful that they wanted to do this for John and me.
The boys enjoyed meeting their great aunt Manny and Kristen.  In typical form Jake charmed the pants off of them from the get-go with his smiles and laughing and generally outgoing personality.  Unfortunately I don't have any pictures of this but you can imagine.
Zach was true to form as well.  He quietly observed everything before becoming comfortable with the changes.  It didn't take long to warm up to Manny or Kristen. 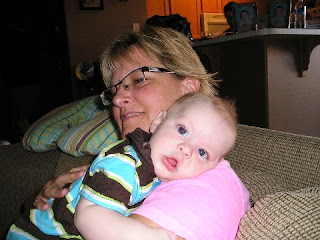 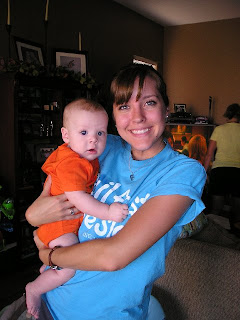 While they were in town John and I took the opportunity to take Olivia on a "staycation".  We went to the JW Marriott Desert Ridge so that we could float on the lazy river, swim, and relax.  Liv got to sleep in the king size bed with us and she had a great time hanging out in the pool with Daddy.  She has already told us she wants to go back to the hotel.  I was glad we were able to give her some 1 on 1 time for a while.  Some days she needs it more than others.


Most of you know that I am NOT a fan of dressing twins in matching clothes, especially when they are fraternal.  I will coordinate but not match the boys.  There are some exceptions.  We received these as a gift and I had to get a shot of them in it.  Most of the time they wear these to sleep in or at different times but here is the token picture of them in them at the same time. 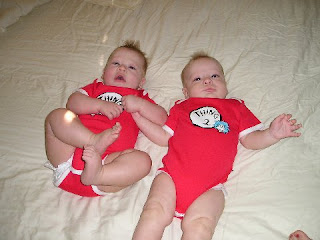 The boys had their 4 month check-up and Olivia had her 3 year check-up last week.  I have big kids.

Jake weighed in at 16' 12.5" (75th percentile) and was 27" long (95th percentile).  Zach is a little leaner at 14' 14" (45th percentile) and 26.5" (88th percentile).  The nurse practitioner that we see said they were "long and lean".  She doesn't have to carry Jake around every day though.  Compared to Olivia though, at 4 months they are lightweights!  She was almost 19 pounds at this point but only 25.5" so they definitely have her in the height category.  Not really a surprise.
We have started them on solids.  Kind of.  We have given them peas so far and they aren't huge on them but are getting better at the whole eating with a spoon thing.  Only about 3/4 of what I give them ends up on them now.  This is how I feed them.  Jake tends to be more interested in the toys and is much more overdramatic as far as gagging goes.  But that's not a surprise.  He's our diva! 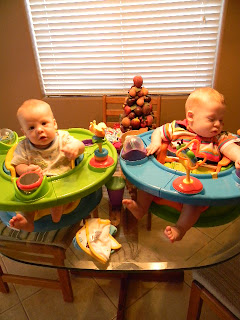 Sweet Olivia is definitely in her terrible threes.  Lots of "No!" and "Why?" come out of her mouth to the point where I just want to shoot myself.  I suppose it is to be expected though.  And then she goes and redeems herself by sitting nicely with her little brother and asking if I want to take a picture. Yes, please! 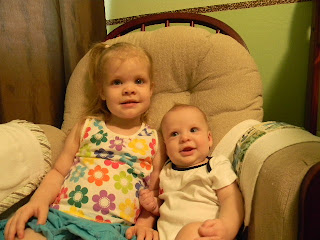