New Kids concert is tonight! Woohoo. It's going to be so great. I can't even wait. I don't care what all of you say, it's going to be awesome. I am taking my camera tonight so I will try to update tomorrow with pictures.
My dad and sister are in town. They came in yesterday to see Olivia and Erin is going with me to the concert tonight. Olivia has her 4 month doctor's appointment tomorrow. She is going to get more shots at this one and since she still has a cough and is congested I'm going to have them check that too. She still seems like she feels fine but she is really snotty and coughs a lot so it concerns me. It doesn't help that her dad has a cough as well and won't go to the doctor for it but that's another story. Don't even get me started.
I put her in her baseball outfit on Saturday. She looks like a little boy in it but it doesn't matter. The outfit is perfect because there is a "10" on it. She's going to follow in her mother's footsteps. My boss says she is going to be a switch-hitting first baseman and one of my old coaches says she looks like a power-hitting second baseman. I guess we will see. 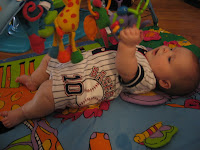 She is getting better and better at rolling over. She can pretty much do it without any help and she loves it when we cheer after she does it. Huge smiles all around. She chats up a storm too. We joke that she has a button inside her mouth because she seems to talk and talk with her fingers in her mouth. She also seems to be following her dad down the love for beer road. I was sitting with my glass of Blue Moon and Framboise (a great combo!) and she bit the rim of the glass for about 10 minutes. I'm sure it felt great against her gums since she still seems to be teething, but it is a funny picture. 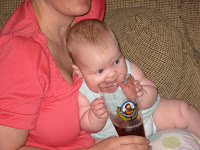 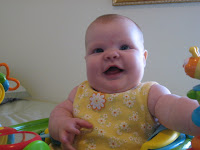 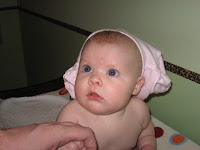 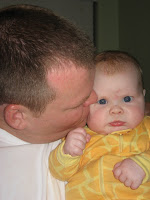 That little girl is too adorable. I just can't stand it! I think she is the perfect #10!!!