Olivia enjoyed her first Halloween. She seemed to after we got her into her costume anyway. She wasn't happy when I was putting it on her. She screamed at one point but quickly got over it. She was in her costume for a grand total of about 10 minutes. It was hot here and her costume was pretty thick and heavy to be wearing in 90 degree heat. She was an adorable little bumblebee though. We had a bunch of trick or treaters. One little kid actually tried to come in our door after knocking for about 15 seconds straight. He was so cute. Little Superman. I'm pretty sure it was his first time going door to door because his parents were taking all sorts of pictures. I just know we are going to be the same way when we take Olivia out for the first time. We have a light up Jack-O-Lantern in the house that Olivia just loves. She knocked it off the table it was on but that's pretty typical. One of her favorite games is throwing stuff on the floor to see how many times Mom and Dad will pick it up. On Sunday she was cocking her arm back and actually going through a throwing motion! Left-handed! So we will see. She is already following in her parents footsteps with a strong arm. 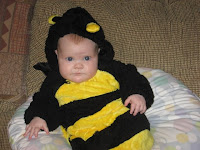 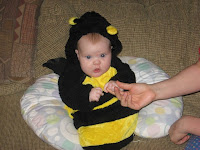 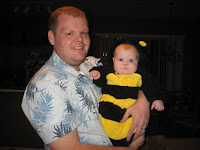 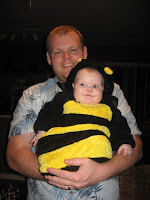 On Saturday we took John's mom up to Sedona for lunch. We left around 9ish and drove up to Sedona. We stopped at Tlaquepaque (ta-la-ka-pak-ee), a little shopping center near the "Y" intersection in the center of Sedona. They have great art galleries, shops and restaurants. It's a beautiful area with flowers, fountains and sculptures. I tried to get some good pictures of Olivia and us. We stopped for lunch at the Javelina Cantina and had some pretty decent Mexican food and then it was off for home. We did stop at a couple of scenic spots to take pictures. It is so beautiful up there but the pictures never do it justice. The rocks are so red but you just can't tell through a camera lens. 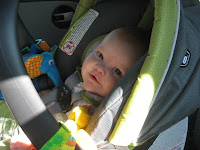 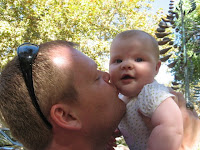 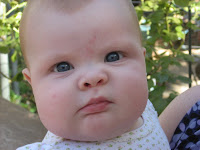 *I read magazines front to back only. I do not skip around and read them out of order.

You also read the ENTIRE magazine, whereas I just read what interests me.

This little bumblebee adds much joy to my life. Erin and I have to laugh out loud every time we look at these pictures. Livi is tooooo much! I love her!