Furlough is a 4 letter word

I think we can all agree that furloughs suck. I've never experienced one. I've heard about them but have never been through the process. Last week our agency laid off 18% of our work force - that's 138 people - because of the budget crisis Arizona is in. In addition to that a furlough pilot program was rolled out so that furloughs could be implemented before May 1, which is when the legislature's furlough program goes into effect. The pilot program gives agencies the ability to furlough covered and uncovered employees. Previously, covered employees could not be furloughed. Without getting into it too much, a covered employee is covered by the State's personnel rules, while uncovereds are not. Essentially, uncovered employees are "at will" employees.

The good news out of all of this is that I was not one of the 18% laid off and it also looks like we will not have to institute furloughs at ADOA. Can I just say what a relief that is to hear. I was really starting to worry about having to take unpaid time off. It would really hit our budget hard. So right now I am still a full-time unfurloughed employee with the State of Arizona. Thank goodness!

Olivia has another cold I think. She started getting all snotty last Thursday or Friday and then was coughing in the middle of the night last night, though it didn't wake her up. She and I went for a walk on Friday and I made sure she had her sunglasses, though they didn't necessarily stay on her face. John called her "Hollywood" when he saw her with the glasses on. She doesn't seem to have a problem wearing them. 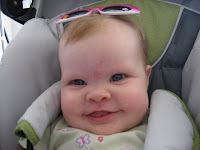 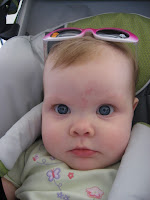 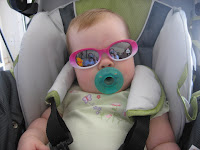 John found O in her crib during her nap with the blanket wrapped around her head. She was sound asleep. And totally sweaty when she woke up. It was hilarious. I'm surprised I didn't wake her with my laughing when I took the picture. She is a piece of work. 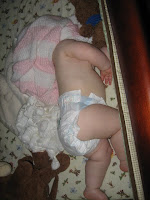