It was Friday the 13th

No, that is not the start of some weird joke.  That is actually the day that we went in for our first trimester screening which included an ultrasound and blood draw.  Friday, August 13, a day that J and I (and the rest of our family) will NEVER forget.
Our appointment was at 1:30 that afternoon so I picked J up at work and we went up to the appointment together.  I still hadn't decided if I wanted to find out what the sex of the baby was going to be but at 12 weeks and 2 days I didn't figure we'd be able to tell anyway.
Our ultrasound tech's name was Alice and she was awesome (we will definitely try to get her again for our future ultrasounds).  I laid down on the chair in a nice dark room and J sat in the chair right next to me.  By the way, I am soooo glad that they warm that jelly stuff because it is not such a shock when it hits your stomach.
Anyway, I'm watching the screen and she puts the wand down and I see the top of two sacs.  The first thing that goes through my head is "Oh, shit there's two!" but I didn't say anything because obviously I don't do this every day so I wasn't entirely sure what it was I was looking at.  But I knew.  Oh yes, I knew right away.
Alice moves the wand around for a second and goes "There is one heartbeat, and there's another."  Wait.  What?  And that is essentially what I said.  I then proceeded to ask if she were serious and I think there was a "No way" in there somewhere.  John is sitting on the chair next to me in shock.  I don't think he said more than 5 words during the 30 minute ultrasound.  I did grab his hand shortly after we saw the 2 and we stayed that way the whole time.  I would squeeze occasionally just make sure he was okay.  I just started laughing because I didn't know how else to react.  How do you handle that sort of news when you have ABSOLUTELY NO INKLING that there were two in there.  Some women get the feeling that something is up, but not me.  I had no idea.
The rest of the scan is kind of a blur.  I would randomly start laughing as we saw two at a time on the screen and would apologize for jiggling the wand all over the place but Alice was so sweet.  She thought it was great that we were having two and I really think she enjoyed watching our reactions to the news.  I wish there was a camera videotaping it all.  I would love to have seen our faces.  John told me later on in the car that he almost kind of started to freak out when she went on about how there was one heartbeat and there was another because all he could see was stuff moving around and he didn't know what he was looking at but that he thought there were more than two in there.  Our friend's and family's reactions were great but I'll share that stuff in another post.
I know that both babies were measuring right on schedule.  We're pretty sure that A is a boy, and I think B is a boy as well but Alice wasn't sure.  She originally thought probably a girl but when she went back to look she couldn't tell.  So, yes, right then and there I decided that I was going to NEED to know the sexes of these babies.  And we will find out.  Here are our little ones individually. 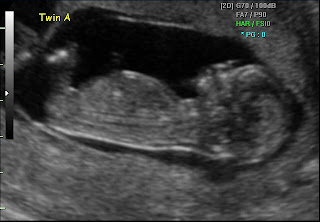 A was the active one.  The mover and shaker.  I think this one is going to give us trouble as he gets older. 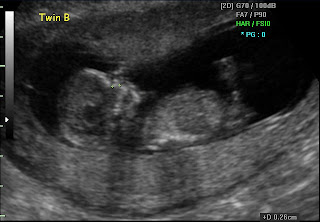 B was pretty chill and took all the kicking from A and didn't seem to care.  Our laid back baby. 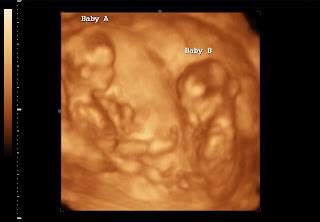 As you can see above A took up as much room as possible and didn't really want to stay still for the ultrasound though we got the best shots of him after all. 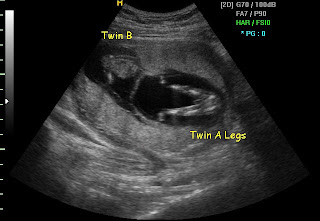 Lots of flipping going on.  Twin A will be our middle child, and B will be our baby.
All our results came back very good.  The risk of Down Syndrome for both babies is less than 1 in 10,000 so that's awesome.  The risk of Trisomy 18 for A is 1 in about 1,900 and for B is 1 in about 3,000.  All good numbers so that is a relief.
We had a check-up with my regular OB today and heartbeats were 153 for A and 159 for B.  My doctor seems to think that I will be able to get close to my due date if everything stays healthy.  He doesn't think I'll make it all the way there but we're not speculating on getting them out now.  It's just too early.  We will have our detailed anatomy scan in about 5 weeks and then after that we'll probably go in for scans and non-stress tests once a month just to make sure both babies are doing well and growing as they should.  I'm excited to be able to see them more often than we were able to see O.  With her it was our 20 week scan and done.
I have learned A LOT about twins in the last two weeks and I will probably be passing along some of that information on this blog.  For example, fraternal vs. identical, monozygotic vs. dizygotic, etc.  There is a ton for us learn and a ton for us to decide as far as changing how we were planning for another child.  I'll keep you all updated!
Posted by J, B, O, J & Z at 4:53 PM

I can't wait to hear more about this!
I can't wait to know the sex!
I can't wait to see a twin baby bump!
And I am going to email you the Swagger Wagon video I just watched. I know your are against the minivan, but this is pretty funny!
Glad you are feeling well!

holy crap! I have decided that all I care about is that you have 2 healthy babes! I am in a whirlwind of excitement for all of you~

Hi there :) I was stalking on your blog (I'm Kelley's cousin and found your blog while reading hers). A long time ago she mentioned that you have a daughter around the same age as my son, so every few months I take a peek at your blog. And I decided it's finally time to leave a comment, because I wanted to say CONGRATULATIONS! How exciting to have twins :)

I look forward to learning all the "stuff" about twins too! Enjoy these last few months of having all this time to journal. Livi is going to be thankful to you for her "story" AND the twins too ... altho they probably won't have as much written about them unless you get a nanny! :-)