Edited 9/28/10 - We had our first toddler bed casualty last night.  No problems with the door being closed or pacifier lost but apparently O fell out of bed right as John was getting into bed.  All of sudden we hear her crying and when he went to check on her he couldn't see her but got a night light on and she was sitting on the floor next to the bed saying "bed!", "bed!" over and over again.  Poor thing.  J told her she could just climb back in bed, helped her in, and she was fine after that.
J and I have been talking about converting O's crib to a toddler bed for a couple of months now and we finally got it done this past weekend.  She is almost 2 1/2 and not once had she tried to climb out of her crib but we're going to be moving her to our guest bedroom so we wanted to do this transition piece of it first so she's used to it when we switch rooms on her.  I was nervous about how this was going to play out because whenever we'd read books or look at pictures of "big girl beds" she act like she wanted one but when we asked her she'd say no.  But we knew it was time and we did it Saturday before nap time so she'd have a few times of going to sleep in it before the week started up again.
O was so excited once we got that front piece off it that she climbed right in and laid down. 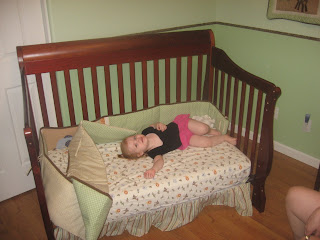 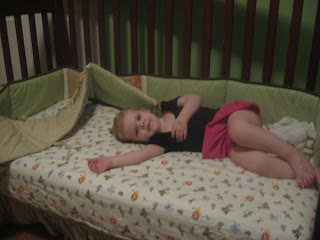 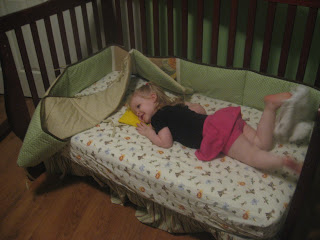 Eventually I was able to get the barriers on the sides.  She likes to sleep in the lower left hand corner of the bed so that's why I wanted them on there, at least temporarily, until she gets used to being able to get in and out on her own.  Of course she had to load all her dolls in there as soon as we were done. 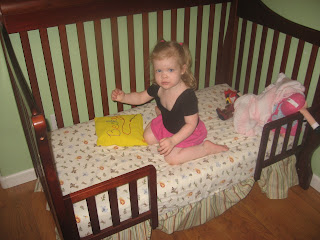 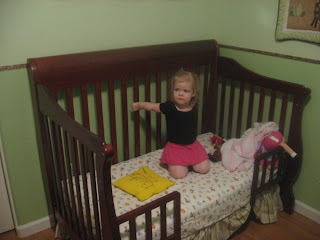 It was not nap time but she wanted to pretend that it was so she got her blanket and laid down. 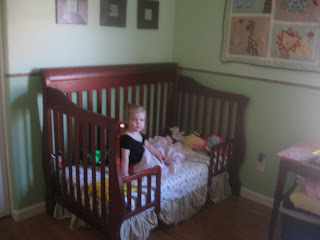 I was amazed at how open the room felt with that big front section removed.
I have to say that I was expecting the worst when we put her down the first few times but once again my daughter has surprised me.  Since Saturday, not once has she woken up and climbed out of bed.﻿  She has slept awesomely even with the change.  I don't know if she realizes that she can get up on her own now.  I think she still feels like she needs us to come in and get her after she's woken up.  I am not going to clue her in otherwise!  The only problems we had were last night when she woke up and realized that her door was closed (we close her door every night after she is asleep but I don't think she realized it because the bumper was blocking her view) and then she woke up again a little bit later on when she lost her pacifier (once again, the bumper wasn't there to stop it from falling out so I think we are going to rethink the removal of the bumper - at least until she isn't using the pacifier anymore (don't even get me started on that, you know how I feel about it)).
Yay for a "big girl bed"!
Posted by J, B, O, J & Z at 1:44 PM

What a big girl!

That's great! We have been talking about making Kt's crib into a toddler bed too for months and have yet to do it. I am worried she will get up all the time but maybe she just won't realize she can....that's too funny.

O is so precious! She's so easy and cooperative! Do you realize how lucky you guys are? Seriously!!