Olivia had her 2 month check-up this past week. She came in at 23.5 inches tall and 14 lb 5.5 oz! I say A+ baby as the title because her weight puts her in the 95+ percentile for her age. So instead of saying she's chunky (which of course she is) we are saying that she has an A+. Her height is in the 85 percentile. She also had her first immunizations at this appointment and she was not happy about it to say the least. She screamed for a couple of minutes after the shots (3 of them, plus an oral thing) but we were able to settle her down. She was fine for several hours and then all of sudden decided that she was going to scream inconsolably again. I did everything I could to get her to calm down and after 15 minutes or so (and some infants Tylenol) she fell asleep in my arms, only to wake up an hour later and scream again for several minutes. I even tried swaddling her for the first time in a long time but it really didn't seem to work. I can only assume that she was not feeling well from the shots. She had never done anything like that before. She was more sleepy than usual which the doctor said would be the case and she slept for most of the rest of the afternoon. I felt so bad for her, but she was fine when she woke up and we haven't had any other problems since then. She did get some cute little pink camo band-aids out of it. 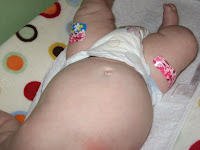 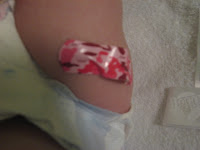 I can't believe that she is already 9 1/2 weeks old. And I can't believe that I only have 3 more weeks of maternity leave yet. Let's not talk about that. Olivia gets more and more talkative every day and enjoys carrying on conversations with John and I. She is really good at the "ooh" sounds and has recently started a kind of high-pitched scream thing. It's actually really cute despite how I described it. 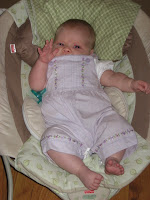 We think that she is going to be a thumb sucker. She loves to gnaw and suck on her fists and especially her thumb. Her hands have become her focus rather than the pacifier. She drools all over the place too. I didn't realize this, but apparently all the signs of teething like that can happen several months before the first teeth come in. So she is pretty typical in that respect. 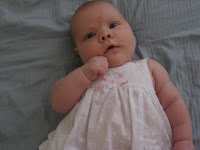 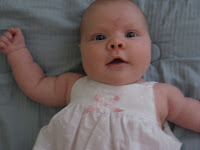 We are all continuing to do well. I am starting physical therapy for my left wrist on Monday. The orthopedic guy I saw said that's what my problem was. I don't think that I've blogged about it before. It started in probably the last 6 weeks of my pregnancy and I thought it was just related to the swelling in my fingers that I would get overnight, but the pain never went away after delivery like it did in my fingers. So John finally got me to go to the doctor and luckily it wasn't anything worse than tendonitis. It can be extremely painful when I pick Olivia up and even when I turn a doorknob. So hopefully whatever therapy they have me doing will help.
Daddy is still working through his first time parent learning curve. Please take a look at the picture below to see what I'm talking about. I cracked up when I walked in and saw how she was dressed and John said that he wasn't sure he had done it correctly. And, yes, he was completely serious when he put the pajamas on. It wasn't a joke. I thought it was cute. 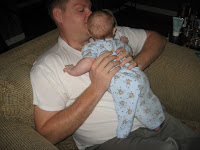 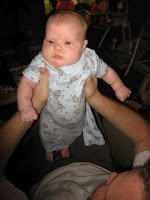 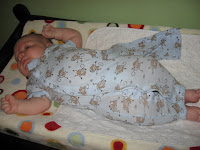 OMG I am dying laughing at how John dressed Olivia - nice job!
~Kelley