I know. I'm almost 2 weeks late on getting this posted. I've been kind of busy and haven't had the time to sit down and get it down. John has Olivia and they're watching football so I'm going to take advantage of that and finally get this done.

The weekend was awesome! We flew in on Friday morning to Austin. Olivia is a great traveler. She was not at all scared of flying and didn't cry once. I made sure that I fed her when we were taking off and landing so as to help her pop her ears from the pressure and it seemed to work. Most of the rest of the time she slept or quietly sat on one of our laps. John and I decided that she is a better traveler than we are. That weekend I lost my keys (they were on the shuttle for the lot we parked in, so thankfully, they were waiting for us when we got back) and lost my purse getting on the airplane (the woman boarding behind us picked it up and returned it to John). The strap had broken and I didn't feel it fall off. I told everyone that I became a parent and lost my mind. I have told Olivia that I used to be really together and with it. Now, not so much.

Once we got there we went to my sister's house and changed. Danny was there on h 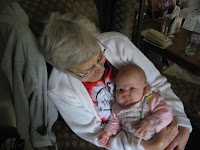 is lunch break so we got to talk to him for about 10 minutes. Then we went to see Busha. It was her first meeting with Olivia and it went really well. Olivia was very well 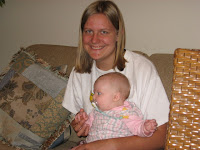 behaved. While we were there my cousin Mary Beth, Uncle Larry, Aunt Manny, and Erin's boyfriend, Ryan, all stopped by. It was a full house in Busha's little apartment. But it was really nice to see her one on one for a little while. 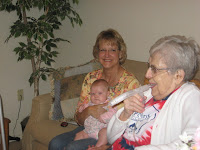 We stayed in a hotel so we went and checked in and then had dinner with Erin and Ryan at one of their favorite pizza places in the area. Olivia was pooped by that time but we still stopped by Target so that I could get a new purse. I went in for a red one and came out with a blue one. Oh well. Another example of my losing my mind: I left my drink from the restaurant on top of the car when I got in and it fell off as we drove away. I was so disappointed. I never do crap like that! 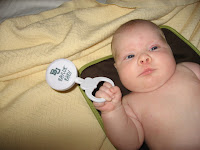 On Saturday, John, Olivia and I drove to Waco to visit Baylor and to see one of John's friends from his grad school days there. We had lunch at his favorite bar/restaurant, George's. Pat Green is a regular there but we didn't see him that day. My Aunt Manny hosted a happy hour and hors d'ouerves get together that night. Olivia got to meet her cousins Kristen, Thomas, Jason, Noel, and Ellie as well as her Great Aunts Barb and Laurie and close family friend Jan. Grandma and Grandpa had 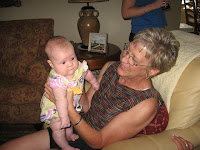 made it in to town by then so we saw them too. It was a lot of fun and Olivia did not seem at all overwhelmed by all the people and by being passed around. She and Ellie are about 8 months apart and they seemed to like each other. I am really excited to see them together when they get older. 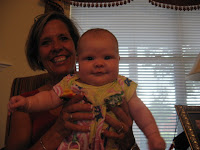 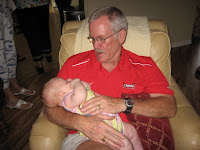 Sunday was her Baptism. She was great during Mass and did not cry when the Deacon poured the water on her head. I knew she wouldn't. She loves her baths and we do pretty much the same thing, so she was used to it. She looked so cute in her gown. I didn't put her little bonnet on, but she did have really cute shoes on. Unfortunately, I don't think I got a picture of those. After church we went over to my Uncle Larry & Aunt Laurie's house where we had lunch and drinks. Olivia got to meet her cousins Price and Luke, her Great Aunts Sandra and Robin, and Great Uncles Rich and Andy. Busha was able to make it to the Baptism and the party too. We weren't sure she was going to be up to it, but she was and I am so glad. Olivia got some wonderful gifts. We so appreciate everyone that made it. It meant a lot to all of us. 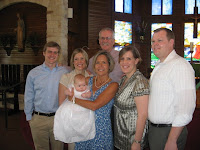 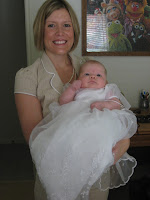 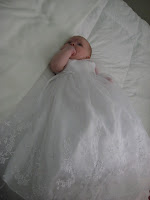 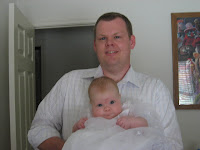 On Sunday night, Jason, Noel, Erin, John and I left the kids with the grandparents and went to the Salt Lick restaurant. It's a pretty well known barbecue joint just outside Austin in Driftwood, TX. The food was good, but John and I decided that we are Memphis barbecue people, not Texas. The atmosphere was what made the place with long wooden table and benches. It was almost community style but you still had your own separate area. 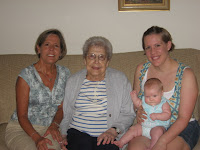 On Monday we went over to see Busha again and took our "4 Generations" picture and then went down to Erin's house. She took us and my parents to lunch at Shady Grove. It was an awesome little restaurant too. They have a lot of live music there at night and I really want to go back to hear some of it. Monday night, aft 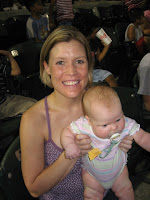 er my parents left to drive back to Houston, Erin, Danny, John, Olivia and I all went to the Round Rock Express game at Dell Diamond. The RR Express are the AAA affiliate of the Texas Rangers. It was hot and humid, but it was $1 hot dog and coke night, so we took advantage. I, of course, got myself a pair of socks as I do at all new ballparks that I visit. Erin said she thought she saw Scott Servais (former MLB catcher for the Cubs and other teams) but I missed him so I'm not sure.


Tuesday we flew home. We were completely exhausted, but I think Olivia could have gone several more days. She did really well in the hotel. She slept through the night, even giving us 11 hours one night. She has been pretty consistent at sleeping at least 7 hours every night since she was about 8 weeks old. 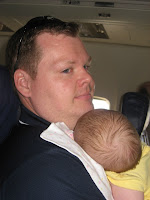 Now she usually sleeps no less than 9 every night. She turned 3 months old yesterday! The time has flown by, and she will start daycare on Monday. I will be 5 minutes away so I will probably head over there during my lunch hour on most days.

My brother turned 25 yesterday! Happy Birthday Danny! It's odd to think that the youngest Harper kid in my immediate family is a quarter of a century old. =)
Posted by J, B, O, J & Z at 11:19 AM