A Celebration of Busha

My grandmother, Busha as we call her, passed away on December 18th. She was an incredible woman - a nurse, first generation American, mom, and grandma. She was with us much longer than anyone, least of all her, ever expected and all of us are extremely grateful for that.

John, Olivia and I had planned on spending a quiet Christmas at home but those plans changed. We flew into Austin on December 21 where we stayed with my sister and brother. We had a really good dinner at Shady Grove (awesome - if you ever get to Austin you should go). On Monday morning we drove to San Antonio where we met my parents at Garcia's restaurant (check out another blog I contribute to for more info: http://friendstraveling.blogspot.com/). The funeral Mass was held at 2:30 on Monday. It started with a beautiful Rosary led by my cousin MaryBeth. Father Jimmy, who performed the Mass was awesome, as always. He did my grandfathers as well and is an adopted member of the family. John and Noel were the designated babysitters and I give them so much credit having to entertain a 7 month and 14 month old for almost 2 hours in a church. Thank you!

After the funeral we headed to my Uncle Rich and Aunt Sandra's house where ALL OF US (all 23 people) were staying for the night. My family is the best so we were all so excited for this. And I was not disappointed. We all get along so well. Aunt Sandra made her incredible gumbo and there was plenty of other food and drink to go around. Here are some pictures from the night: 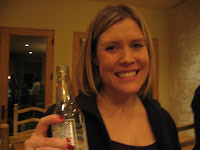 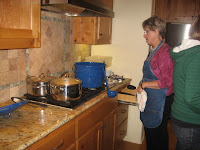 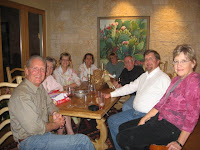 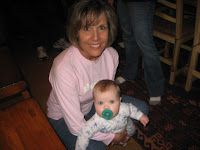 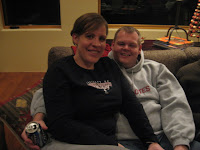 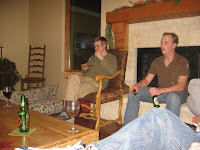 We just wanted to get a shot of the way Danny was sitting. Hmmmm. 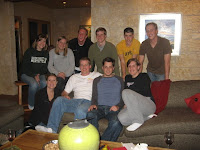 The cousins. Rarely are we all together so it was special that we could be, especially at Christmas time.
The following day was Busha's burial at Fort Sam Houston Cemetary in San Antonio. She is buried with my grandfather. The interment ceremony was short but very nice and afterwards almost everyone piled into Garcia's (yes, two days in a row for us - it's soooo good). They barely had room for all of us but we made it work. Garcia's Specials and Big Red (almost) all around. 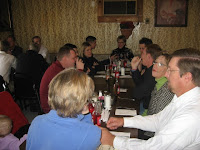 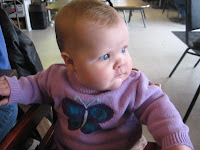 Olivia's second taste of Garcia's. She wanted what Mom and Dad had on their plates.
After Garcia's we drove back to Austin where we stayed at Ryan's house for a couple of days. We attended Christmas Eve Mass at Ryan's church, St. Thomas More, and then went to a nice dinner at Cool River Cafe. I, of course, had an appletini (I can't help it, I'm a sucker for those) and nice steak, but Olivia got fussy toward the end so no dessert at the restaurant. The picture below is pre-dinner on Christmas Eve. She is wearing my Coyotes sock hat and is missing a shoe. Olivia has started gnawing on things a lot more than she used to. I'm hoping that means that her teeth are going to come through soon. 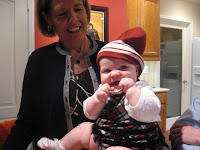 On Christmas day we went to my Uncle Larry and Aunt Laurie's house for dinner. Uncle Larry made pheasant and it was delicious. Of course, we had snails as well, as it is a Glomski family tradition, though some who married into the family still don't get it. My Aunt and Uncle have a great view of a golf course from their back patio and it was a beautiful day to sit outside and watch the deer come up to the houses and watch Olivia laugh hysterically at Ellie and the dogs. We flew home the evening of Christmas but it was all worth it. We had such a fun time with family honoring and remember Busha and what she and Dzia Dzia (pronounced Ja Ja) did for all of us. 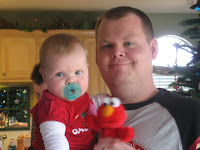 Elmo was a gift from Jason, Noel and Ellie. She loves him! 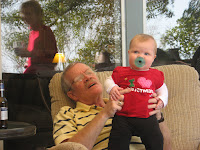 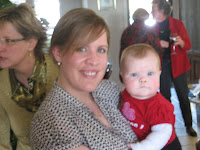 Interesting pic of Danny!
Loved the "celebration of Busha" entry Becky. What a large and loving family legacy you have and will pass on to Miss Olivia!
Love, Cindy