Yes, I know. I am woefully behind on blogging. But really, nothing has been happening out here. Olivia is getting bigger, the Cardinals are going to the Super Bowl. Wait, what?! It must be a cold day in hell because it's true. How it happened, no one really knows, but it is pretty exciting. I hope they do well, and if they don't win, I hope they at least make it a game.

Anyway, here are some pictures of Olivia. One of my coworkers got her the shirt she is wearing below. It is her very first Polo shirt. It's a 12m. She is only 7 1/2 months. She is wearing anywhere from 9-18 month clothes depending on the brand. 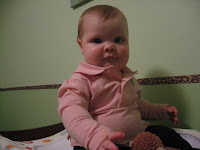 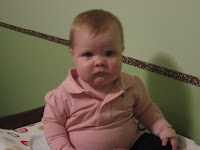 She is not crawling yet, but we don't think it will be long before she is. She scoots around on the floor and when she reaches out for something in front of her she almost does the splits. She is halfway to the crawling position and John and I think that one day she will accidentally fall into it. When that happens we are in trouble. So is Elvis.
Olivia was also sick again. Yes, again. We can't seem to keep the poor thing healthy. It's that daycare. She had a fever, cough and runny nose which led to a trip to the urgent care place and then her dr.'s office. Luckily it wasn't RSV or the flu. She is doing much better now, but I think we're all just waiting for the next round. She still loves her baths and she has graduated to not using an infant tub. It is just her and her toys splashing around in the tub.
You know that old saying that kids make liars out of you? Well it's definitely true. I think that I mentioned before that Olivia literally gagged when I gave her sweet potatoes. I am going to clarify that. She gagged when she ate the sweet potatoes that I MADE for her. I decided to try some jarred ones to see how she did because sometimes it takes them a while to get used to a flavor. She ate them all with not one strange face. The more I thought about it, the more I realized that she didn't really eat any of the food that I made for her. I can't explain why - maybe the texture or something - but she eats everything else. And she likes everything. Watch - she'll not like the next thing I try to give her.
Posted by J, B, O, J & Z at 2:12 PM

Yeah, and I still don't. Blech.