We finally got Olivia a new carseat. It is long over due, and though it hasn't been installed yet, I'm sure it is going to work great. The infant carseat we are using right now is good up to 22 pounds, and since she is already 21lb 6.5oz, it was definitely time to bite the bullet and get her a new one. In hindside it probably would have been easier to get a convertible one in the beginning and then we wouldn't have had to worry about getting another one, but I wanted the travel system. Don't get me wrong. I LOVE the travel system, but in the interest of saving money it probably would have made more sense to start with a convertible seat. You live and learn. At least now I have what I need for the next child!


Of course it took me f . . o . . r . . e . . v . . e . . r to decide which one I was going to get her. I had picked an Eddie Bauer one out online and had every intention of picking it up at Babies R Us last night. It had a weight limit of 100 pounds so it would last a long time. Well, I get to BRU and find the seat and it does not feel comfortable as all. It was really hard, and I was not going to put Olivia in that uncomfortable hard seat. So I didn't get it. But I did end up picking up the one right next to it. It's an Evenflo Triumph Advance Deluxe, rated up to 35 pounds rear facing and 50 pounds forward facing, so it'll last a long time. It is soft and tan so it won't get burning hot in the Arizona summers. This is what it looks like: 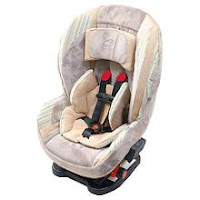 Well, this picture doesn't really show you the colors very well. It is not pastel like this picture. It is a tan color, very neutral. I really hope O likes it because I get totally stressed out when I have to buy safety items for her and I don't want to have to go get another one. Plus, I got a killer deal on it.
Posted by J, B, O, J & Z at 2:25 PM

I think I will go out and buy the same one myself next week! Thanks for doing all the research Beck!

Ellie has the same car seat! It cleans up pretty well and I think it's comfortable...although I've never sat in it :)