I don't believe that my blog title requires much explanation. Now that Olivia is extremely mobile (still scooting) she is everywhere. Examples are below. The first four are of our guest bedroom/office where I work on Fridays. I keep her in there with me and this is only part of what she does. She even dumps over the trashcan and pulls everything out. She ripped the back paper cover off the dictionary after she was done "reading" it. The bottom two are of our living room. We now have all of her toys in a laundry basket that also gets dumped over and sorted. She has decided that she loves to pick up every toy and toss it into the air over and over again. They land everywhere. 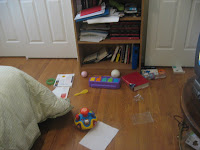 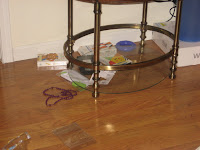 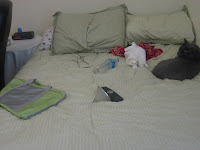 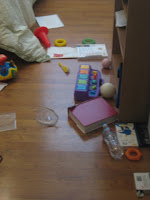 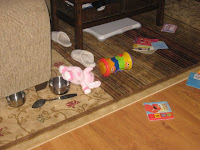 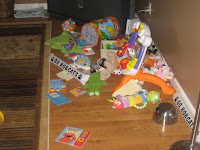 Olivia is now 10 months old, and while she doesn't have any teeth yet, we think she is very close to cutting that first one. I hope it happens soon. She gets little blisters on her toes from all the scooting she does so we're having to watch that but it really doesn't seem to bother her. She is a little roly poly when we lay her on the bed and she loves her stuffed animals. She'll carry them around as she scoots all over the house.
Saturday is the last home game for the Phoenix Coyotes this season so we will be taking her to the game. Some of our friends gave us a cute little Coyotes outfit that we are going to try to put on her. It's a 6-9 month outfit but looks like it may fit her. It looks like a little cheerleader outfit. She loves going out and looking around at all the lights and activity. I'm also going to take her to John's office on Friday. It has been a long time since his coworkers have seen her so that should be fun. She has gotten bigger and has gotten a ton more hair since the last time we were there.
My birthday was very nice. Thank you to everyone for the birthday wishes. I appreciated them. I took the day after off from work and went and had a massage and facial. I don't know why I hadn't done it before. After that I went and got John and we went to a Spring Training game. It was a nice relaxing day. My parents and sister came into town and we went to an awesome dinner at Fleming's on Saturday. It was so good. Especially the creme brulee. I could eat that every day. My parents also got me our area rug for the living room which we badly needed. I also ordered a zebra print rug for our bedroom. It's going to look so great against the dark red of the comforter. I can't wait for it to come in!
For those of you that hadn't heard, the day care that Olivia is currently enrolled in is closing effective April 17. It is State subsidized for State employees, which is why we get such rockin' rates, but with Arizona being so deep in the red they are cutting all sorts of stuff. The day care is one of those things. The company, La Petite, will be honoring our current rates (substantially lower than regular La Petites) until September 1, which is great. The only problem is that the school out near us does not currently have an infant room but is in the process of starting one. They had originally thought that it would be open in time for our April 20 deadline, but it will now not be done until the end of May. And that's an estimate. It could be sooner than that, but it could also be longer. It is so frustrating because now we have to put O into another day care for 6 weeks or whatever it is going to be and then move her again. We just can't afford to leave her at another day care permanently because they are all so much more expensive. And of course I don't find this out until yesterday (about the infant room not opening yet) so I'm all stressed out about it. But I do know that our original second choice day care does have openings so we can get her in there and not have to worry about missing any work. I just wish there was some way I could stay home with her.
Posted by J, B, O, J & Z at 4:01 PM