First time in a pool!

Happy Father's Day a day late! I hope all you dads out there had a wonderful weekend. We had a nice one out here in hot Arizona. The temp has started creaping up for the season and we are all disappointed about it, but we were able to spend a little time outdoors on Saturday at another 1st birthday party. O's friend, Emma, had her party (John and Shawn, Emma's dad, work together and they were at O's party too). They have a pool so I tried taking O in. It was her first time in a pool and she was NOT a fan. I slowly got her further and further in but she didn't want much to do with it at all. We'll try again another time. John and I realized that we should have put her in the swim lessons we've been talking about much earlier. Before she developed fears of anything. Our neighbors have a pool so we'll try there too. She'll get it. 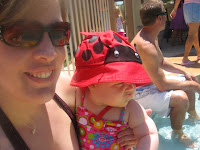 Olivia also got a great gift from the Olsen's. Can you believe that we had not gotten her a glove before this?! She now has one and she really enjoys the ball that came with it. It's softer than a baseball or softball so it bounces really well and she just cracks up at that. Now we just have to wait to find out if she is in fact right-handed. 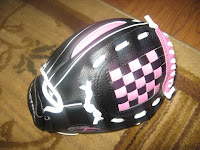 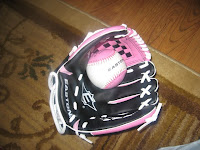 She's not quite walking on her own yet. I tried to get her to take some steps by herself this weekend and we only got 1/2 a step, but she did stand on her own for a bit so that's a move in the right direction.
Posted by J, B, O, J & Z at 8:58 AM

We got Katie that same glove/ball set. Jeff thinks that if the ball is around her all of the time than she will just automatically grow up with a love for the game. :) We'll see.

Oh my my ... that glove is adorable! AND I can't believe she's not a fish yet ... when is she coming to her grandparents house in Texas? I'll get her comfortable in the water for sure!