Working, but for how long?

It's a little frustrating living in the state of Arizona to say the least. Especially now. Most of you know how I feel about the people here, and about living here. Not a fan, to say the least. It's even more frustrating to work for State government when you have elected officials who can't find a way to work together to come to an agreement on a budget that was due two days ago and has now been extended to a special session starting Monday. A government shutdown almost came to fruition yesterday because these people can't sack up, put their pride aside, and stop acting like 4 year olds. A little harsh? I don't think so. Apparently the Senate locked the doors to their room so that the Governor couldn't get in to veto their budget. You tell me that I'm being harsh when grown men and women are acting like children. I was almost forced to take unpaid time off yesterday because of these people. I can't afford that! I want, and need, to work! We may be forced into having a tax increase because of these people. Somehow the great State of Arizona went from having a significant surplus at the end of FY 2006 to having a $2 billion deficit now at the end of FY 2009. How does this happen? I don't have the answer, obviously, and the government doesn't have an answer either. Things just seem to keep getting worse. The only thing we have to be thankful for is that we are not as bad off as California. But we could get there if these people don't get their heads out of - I won't go there, but you know what I'm saying. Thank you very much to Department of Homeland Security director Janet Napolitano who left her Arizona governership and the state in the crapper. Much appreciated. And with the way Barry Obama is going the country may be in the same situation.

Wow, anyway. I'm off my soapbox. I don't have a political nature so I don't know where that all came from!

On a lighter note, here are some pictures from Olivia's first birthday party day. We have very few family pictures. We really need to work on that. I had a mousepad made for John out of the first picture for Father's Day. 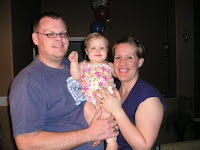 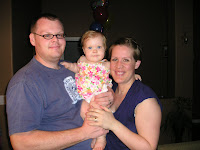 No big plans for the 4th of July weekend. We hope all of you out there have a very happy and safe holiday weekend. Have fun and enjoy the fireworks!

You know, its crazy that the only way to feel better is to say 'Well, at least we're not California!' The budget stuff is ridiculous - did you hear they closed down the state parks due to budgetary restrictions????? What is this state coming to?? Good luck - I hope you keep having to go to work everyday!

Way to get it off your chest, Becky. I'm thinking we need to get rid of each and everyone of them in Washington and start over. Ok, don't get me started.