Is Life Passing You By?

Yesterday was kind of a weird day for me.  I occasionally have days where I just CAN'T STAND driving (and living) in Arizona.  Nothing in particular has to happen in order for me to feel this way.  It's generally a combination of minor things that turn me into a big freakin' baby who calls John almost in tears out of frustration.

Part of my problem yesterday was that I am so tired of driving in rush hour traffic 4 days every week.  I don't want to do it but I have to.  I really just want to stay home with O and with a face like this, who wouldn't? 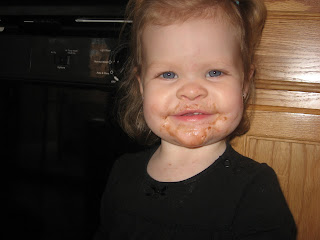 (She got to lick a beater while I was baking a cake - I think she may be a chocoholic like her mom!)
Anyway, I got listening to the new George Strait CD and there is a song that talks about that old line that says life isn't about the breathe you take but the moments that take your breathe away and it really got me thinking about what I am doing now and how I/we are living.  I feel like I'm working just to get by and in a way that's kind of true.  I have to work right now.  There really isn't any other option, even though I've heard it said that you can always find a way to stay home if you really want too.  Sure, I could stay home if we wanted to be in debt for the rest of our lives and I don't want to live with that stress.  I want to be able to give my kids what they need and what they want.  But I feel like I'm missing so much with Olivia - I didn't see her first steps for example (there are those out there who will say "she'll take more" - but not first ones) - and I'm sacrificing this early developmental time of her life to get ahead.  Sure, it's great that she is getting some great exposure to other kids and the socialization skills that she will need in the future but that doesn't make me feel a whole lot better.  At the same time I am totally conflicted because I want to stay home but part of me doesn't think I could do it full-time.  I think I'd like to have the opportunity to work part-time or be able to volunteer somewhere just so I can get out of the house and have my own time occasionally.
Then I got this in my e-mail box today:
A man sat at a metro station in Washington DC and started to play the violin.  It was a cold January morning and he played six Bach pieces for about 45 minutes. During that time it was calculated that thousands of people went through the station, most of them on their way to work.
Three minutes went by and a middle aged man noticed there was a musician playing. He slowed his pace and stopped for a few seconds and then hurried up to meet his schedule.  A minute later, the violinist received his first dollar tip: a woman threw the money in without stopping.  A few minutes later, someone leaned against the wall to listen to him, but the man looked at his watch and started to walk again. Clearly he was late for work.
The one who paid the most attention was a 3 year old boy. His mother tagged him along, hurried but the kid stopped to look at the violinist. Finally the mother pulled hard and the child continued to walk turning his head all the time. This action was repeated by several other children. All the parents, without exception, forced them to move on.
In the time the musician played, only 6 people stopped and stayed for a while. About 20 gave him money but continued to walk their normal pace. He collected $32. When he finished playing and silence took over, no one noticed it. No one applauded, nor was there any recognition.
No one knew this but the violinist was Joshua Bell, one of the best musicians in the world. He played one of the most intricate pieces ever written with a violin worth 3.5 million dollars.  Two days before his playing in the subway, Joshua Bell sold out at a theater in Boston and the seats average $100.00 each.
This is a true story. Joshua Bell playing incognito in the metro station was organized by the Washington Post as part of a social experiment about perception, taste and priorities of people. The outlines were: in a commonplace environment at an inappropriate hour: Do we perceive beauty? Do we stop to appreciate it? Do we recognize the talent in an unexpected context?
One of the possible conclusions from this experience could be:
If we do not have a moment to stop and listen to one of the best musicians in the world playing some of the best music ever written, how many other things are we missing?
It kind of sums up how I was feeling yesterday.  What am I missing?
Posted by J, B, O, J & Z at 11:03 AM