Yes, yes, I'm late on getting this out there.  We've been super busy for some reason so I am just now getting a chance to get pictures uploaded and on here.

We went to visit J's family in OK on June 30.  We decided to fly on Southwest buddy passes which, looking back, probably wasn't the best idea.  After being the last 3 on the flight, having to ask someone to move to a middle seat so that O and I could sit together and an hour and a half delay because of no a/c on the plane we finally made it to OK at 11:45 p.m..  It was when we were getting the rental car that O lost it (poor thing was so tired and had done so well until then!).  We finally got on the road and got to J's mom's house at 1:15 a.m.  O had had a short nap by that time so she got a second wind while we had a snack before bed.  We finally got into bed at 2:15 a.m. completely exhausted.

The next day we took J's mom to lunch and then his brothers and their families came over for a barbecue.  O loved the trampoline out behind Granny's house and she and her cousins had a blast jumping together. 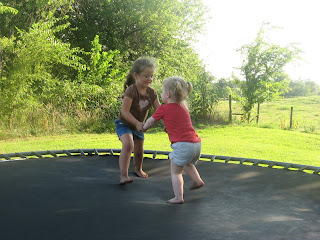 Courtney is almost 5 and acted like a great big sister. 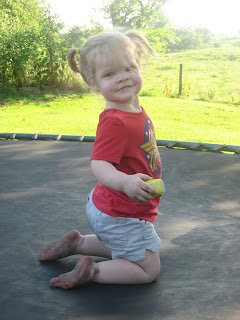 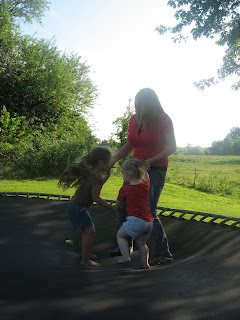 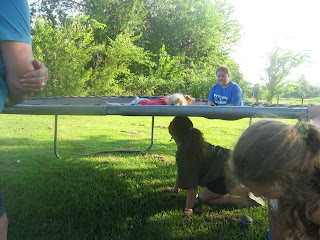 Checking out Aunt Sam under the trampoline. 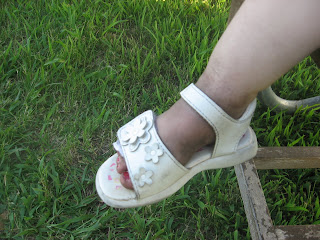 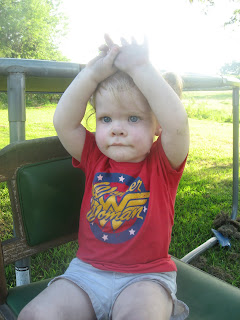 She got soooo dirty but it was worth it.  She also left a black ring around the bath tub.  Nice. 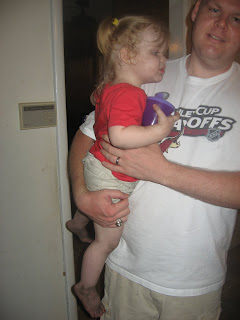 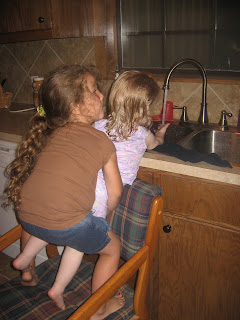 Courtney trying to help her wash her hands. 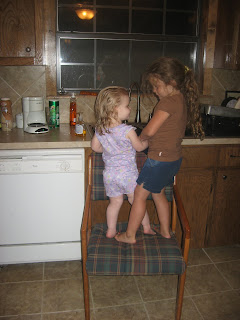 On Friday morning we drove to Wichita in time for my cousin's bridal luncheon.  The drive itself took about 3 hours including stops.  Not so bad but O is not used to being in the car that long.  I tried to get creative in keeping her entertained.  At one point she had my make-up brushes strewn across the back seat of the car as well as lots of different snacks.  I also gave her the camera for a bit and while most pictures were not good this one kind of turned out all right. 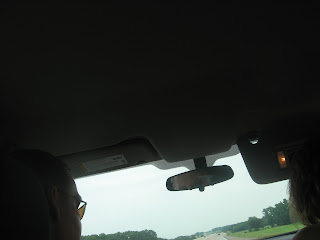 Turns out we have a little swimmer on our hands.  On Friday night we decided to take O down to the pool to put her feet in.  To our surpries she wanted to get right in and swim.  She hadn't been in a pool in about a year and she was not at all interested in the water back then so we didn't expect the reaction we got.  So John went back up to the room to put his suit on and got in with her. 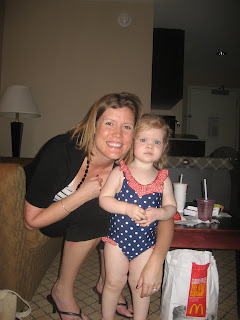 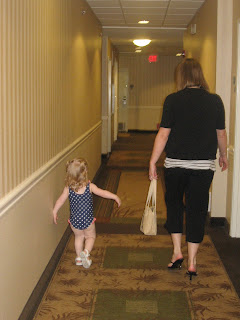 Aunt Erin and her Goddaughter. 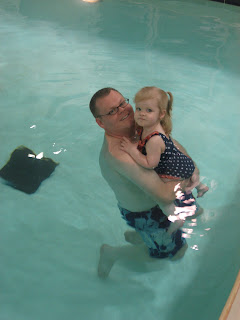 MB and Jose's wedding was absolutely beautiful.  We had a really good time.  It was great to see family and let O have fun with her Bobcat Busha (it's a long story).  O really enjoyed the music and dancing and was not happy when we had to leave.  We tried to get some family pictures but either O didn't want to cooperate or the camera acted up.  We really need a new one. 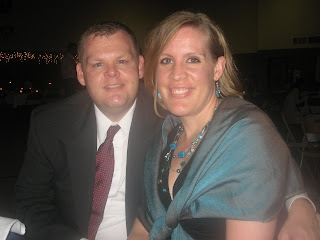 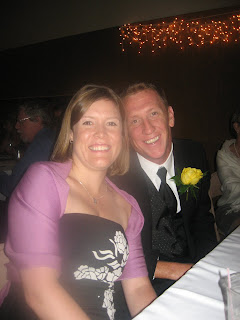 Erin and our cousin, Luke. 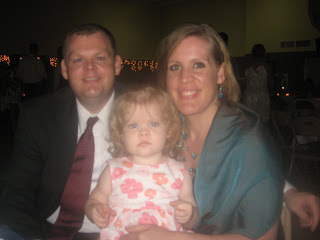 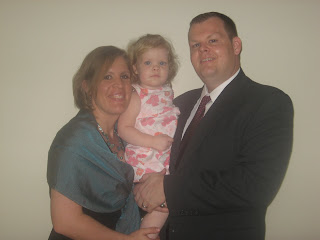 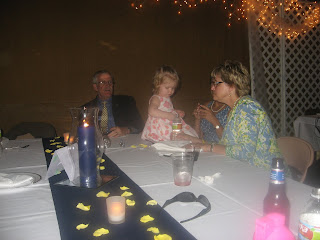 O hanging out with Dadu, Bobcat Bush and Aunt Manny. 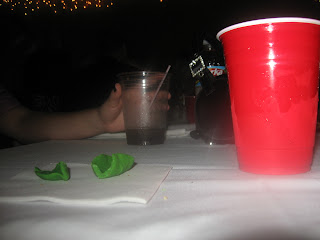 A shot from when O had the camera.  That's Erin's Tangy Whisko in the background.  Tangy Whisko is Maker's Mark and Dr. Pepper.  Try it. 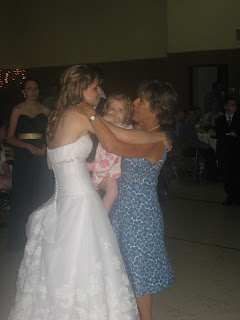 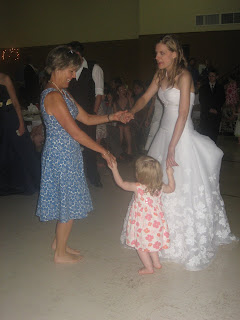 The dollar dance with MB.
On Sunday we drove back to OK to spend the 4th with John's family.  We weren't sure how O would react to the fireworks but she absolutely loved them.  She laughed and laughed as they set them off.  It was almost more fun watching and listening to her! 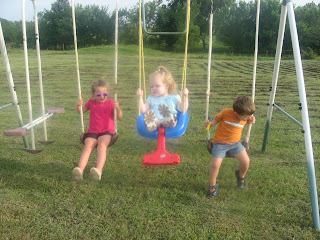 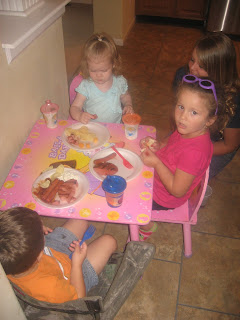 Enjoying dinner at the Dora table
We were planning on staying in OK until Tuesday but the flights filled up so we ended up leaving on Monday evening.  We had a really nice lunch with one of J's old friends, Paul, his wife Amy, and their two kids earlier in the day and were able to spend an hour or two with Linda before we left to head out to the airport.  This leg of the trip went better than the first as J, O and I all ended up being able to sit together.  We got home around 9 p.m. and this was how O looked when we pulled into the garage.  Poor thing. 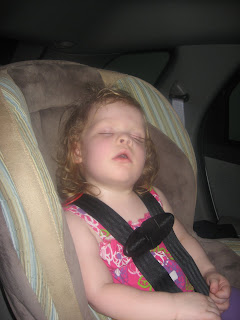 The trip was a lot of fun and we really enjoyed spending so much time with both sides of the family.  O had a great time with her cousins and it really made us want to get back to that area of the country as soon as possible.
Posted by J, B, O, J & Z at 11:08 AM

OMigod I love dirty little kid feet!!! She is getting soooo cute. How do you stand it?! :)

Super little gymnast on the tamp! She's be standing on her head before we know it.

OMG! That child is such a Harper! Dirty feet (adorable) and the trampoline!!! what a character! Reminds me of someone I know named Patti....