The boys have hit the 5 month mark and along with that milestone they have also gotten sick.  Multiple times.  It has really been nothing major.  Just colds - snotty noses (REALLY snotty, boogery noses), slight coughs.  Zach handles these things really well.  He'll still sleep really well, occasionally waking up in the middle of the night but generally sticking with his 10 hour night stretch.  Sure, he can't breathe through his nose but that doesn't stop him from sleeping!  Napping, however, can be a challenge.


Jake, on the other hand, is a whole different story.  You know that Dayquil (I think) commercial where the guy is sick on the couch and the remote control is on the table right next to him but just out of reach and he complains that he can't reach the remote?  That is so going to be Jake.  He is overdramatic in the best of times so being sick makes it that much worse.  He'll be up several times a night crying after losing his pacifier.  Most recently we had to bring him into bed with us and John had to hold the pacifier in his mouth so that we could get some sleep.  Luckily that was a day I worked from home so when I was up at 5:15 for good I just got right to work.  But it was the longest.night.ever.  Even worse than any of their newborn days.  We are finally back to normal with him but I really need to break him of that damn pacifier.
Here are their 5 month pictures: 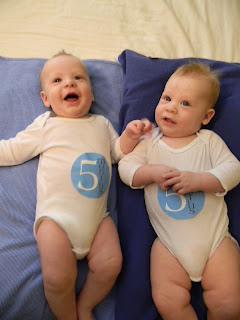 ﻿﻿Zach is rolling both front to back and back to front and is really wanting to crawl but he just hasn't quite figured out how to get all limbs working the right way at the same time in order to do it.  Jake just started rolling from front to back last week.  They are both loving the Exersaucer so I went out and bought a jumper so they both can enjoy time in them (at the same time) and give John and I a break.  It works really well in the morning when John is trying to get everyone ready to go by himself.

Both Jake and Zach are extremely vocal.  Zach has his little squeal/screech thing down and it is really cute.  Both are laughing and it is my favorite thing to get them both going.  They both love Olivia still and she can make them laugh just by standing in front of them and smiling.  I'm so glad I can use her to entertain them from time to time.  And luckily she still enjoys doing it!

One problem I have noticed, though, is that no matter how closely I keep their fingernails clipped they still manage to cut themselves.  Especially Jake.  He has this habit of scratching the back of his head and his forehead leaving scratches all over the place.  Poor kid cuts himself to the point of bleeding and scabbing.  Any advice on how to keep those nails shorter and/or avoid this?

We have started them on solids and Zach is doing particularly well but just this week Jake is finally figuring it out.  So far they have had sweet potatoes, peas, carrots, squash, green beans, applesauce and bananas.  Plus we've started them on the combo fruits like bananas with mixed berries and applesauce with strawberries and bananas.  Jake still has the tongue thrust habit but he seems to like everything I've given him except rice cereal.  He refuses to eat it so I've switched to the oatmeal cereal which he seems to like better.  Zach is eating solids like a champ and will yell if I take too long to get him another spoonful.  I guess its good he has a brother he has to share me with at dinner time so that he can learn some patience!  Too bad Olivia didn't have that.  =)
Jake's favorite thing to try to eat, however, is this:
﻿What can I say about Olivia?  That girl is pushing all my buttons right now.  She is asking why a lot less nowadays but no is still her favorite thing to say.  Of course she has her moments.  She loves to dance and spin for her brothers after dinner and insisted that we take her picture.
﻿She is usually really good for us while we're putting the boys to bed.  She watches Ni-Hao Kai Lan while we're feeding them and the other night she told John that she wants to visit Kai Lan and stay at her house.  John told her it was in China, a long way away.  She said that we could drive the car there.  When John explained that there was water between us and China and that we'd have to fly or take a boat  she suggested that if we take a boat we should all get purple fishing poles and fish off the side of the boat.  She also concluded that, if we want to fly, we could just ask a bird if we could fly on their back.  Ahh, the toddler mind.
Posted by J, B, O, J & Z at 11:35 AM

Ah looking forward to the squealing, dancing and drama ....
God knows I love my grand kids!
They are the best of the best!

How did I miss the section about Kai-Lan ... of course she can go there someday. We'll take her!