The boys are now 7 months old and for their seven month birthday they decided to give me the gift of having to take care of them while they both have colds.  It's been great.  Both are extremely congested and snotty so sleeping has been difficult, especially for Jake who really loves his pacifier.  It is hard to breathe and suck on a pacifier at the same time when you can't get any air through your nose!  But we're dealing with it and I have to believe that every night here on out is going to get better.
In addition to a cold they both each have a tooth!  Jake got his first tooth on a Friday and Zach got his the following Monday.  I did not expect them to get their first teeth that close together, or this early, especially since Olivia didn't get her first tooth until she was ten and a half months.  Even more coincidental is that they got a tooth in the same spot - lower right front.  I'm guessing that Jake will gloat over getting a tooth first as I'm sure he will about being older too.
I don't know their exact heights and weights but I do know that Jake is still bigger.  Zach is catching up though.  He consistently eats more than Jake (recently at least).  I'd guess Jake to be around 19 pounds or more and Zach at around 18.  They are both tall.  I recently had to buy some 12m pajamas for Jake because he's just too long for 9m that both he and Zach normally wear.  Here are some pictures from the 7 month pictures I took of them.  I don't know why I am even bothering with the blue blanket backdrop.  It doesn't look very good and is falling over.  Oh well. 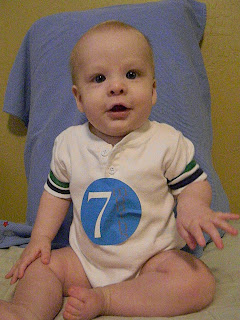 Zach loves anything shiny or with buttons.  He is particularly fascinated by remote controls and anything around mom's neck.  This can become painful for me when he doesn't want to let go of my necklaces.  One of his other favorite things are magazines, or other pieces of paper.  He spent about 15 minutes tearing up a Huggies ad yesterday.  I don't know why.  Olivia was the same way.  At least we know now how to entertain him when we need to distract him.  He is pretty fearless.  He'll climb all over John and I and up onto the arms of couches or chairs to go after something.  It is not odd to have to grab onto his legs to prevent him from going headfirst off the side of the couch or over the arm of our big chair in the pursuit of some incredibly interesting item.  I also can't count the number of times he has seen Jake with his pacifier in his mouth and gone of our and snatched it right out of Jake's mouth. 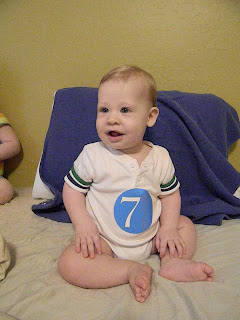 Jake still lives up to the nickname "Smash".  Whereas Zach wants to grab things to see what it is, Jake wants to grab things to see how loudly he can bang them.  It doesn't matter what it is, he wants to whack it to make noise.  This includes mom and dad's arms, hands, legs and faces.  Just this week he is getting the clapping motion down and when he is excited (and on his stomach) he'll kick his feet and clap his hands together.  He is our wrecking ball and is into everything.  And I do mean everything.  We've had to close the door to the man room because he's been eyeballing the bobbleheads.  Discussion of acquiring a baby pen has started but we can't figure out where we have the most room for it.  The free rein they have right now is not going to last as they get bigger.  Jake is still our dramatic one and is a pickier eater than Zach.  He doesn't seem to like raspberries at all and will act like he's gagging if he doesn't like what you are giving him.
﻿﻿The boys still aren't exactly crawling. They army crawl so getting around isn't an issue but once they figure out how to go more than one or two strides on their hands and knees we're in big trouble because they are already all over the place and when they conquer the traditional crawl they are going to be so much faster.  This is one of Jake's favorite places to end up.  I think it is because he can then reach the cord for the floor lamp.  We've had to move him away from cords lots of times already.  He and Zach have also pulled over one of our fake trees several times. 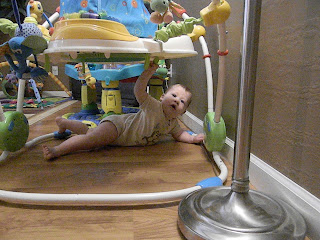 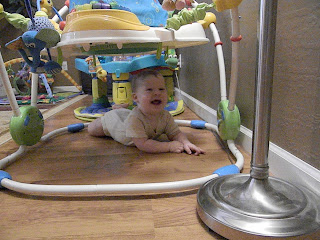 I can't forget to include Olivia in this update.  She is our little princess.  She had originally said that she wants to be Whyatt from SuperWhy for Halloween but I think we are onto a princess now.  Who knows what it will be in a month when the holiday actually rolls around.  This is the "princess outfit" that she puts together for herself.  Love the skirt pushed up by the tutu.  =)  I don't know what's up with her tiara either.

My two love it under the jumper too. Funny!