Time for an update! Actually, the Dickey household has been pretty quiet since my last post. No, I have not decided what I am going to give people yet. I went and got my hair cut off last week. I put a couple of pictures below. It's hard to really tell what it looks like. If anyone knows the show "Jon & Kate Plus 8" on TLC (I LOVE this show) I would describe my hair as a modified version of Kate's hair. It's a little longer in the back but still spiky, and a bit shorter in the front. I'm still trying to figure out exactly how to style it the way I like. I decided that this haircut really needs highlighted hair. I hate how dark my hair has gotten as I've gotten older. 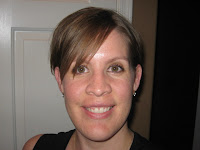 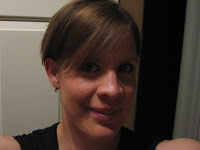 I got Olivia laughing so hard last night. It was the first time that she really belly-laughed for an extended period of time. She absolutely loves peek-a-boo and if you lean in toward her like you are going to bite her but don't. So I combined the two and got her going for about 5 minutes. John was holding her and cracking up as much as she was. I could have done the game all night. It was so much fun. We had her rollin'! My mom is going to try to come out this weekend so I am going to try to get her going again so we can get it on video.
I had to get a picture of her with her Lynx bib. They sent it to us when I submitted her birth announcement on the alumni website. Very cool. Go Lynxcats! 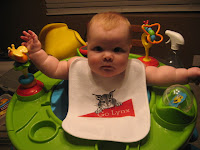 On Saturday we went to some friends house for a barbecue. There were 3 couples there. The hosts have an 8 month old, we have Olivia at 5 1/2 months, and the third couple is expecting and are at 34 weeks. There was supposed to be a 4th couple there with a 2 week old but unfortunately they were unable to make it. It was so much fun! It was great to talk about the kids and pregnancy. None of us girls were scared to talk about bodily issues when it came to pregnancy and childbirth. They guys were great about all of it and contributed but most of the time probably didn't want to hear about it. I remember sitting there thinking, "I never thought, in a million years, that I would be sitting here talking to other people about baby poop and everything else". The pictures below are what she wore to the party. We ended up taking the headband off because it was too tight, but I am still having her wear them occasionally because she is still being mistaken for a boy. One of my coworkers calls her the "Michelin Woman" because of this picture. 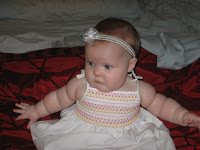 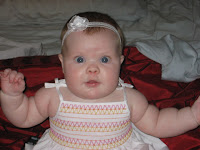 I was going through a cookbook the other night trying to decide on something for dinner and Olivia kept reaching for the book I was looking at, so I pulled out another one and ended up with the following picture. She loves books and I am so glad since both her dad and I are readers. 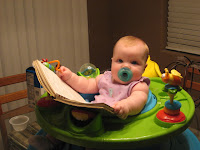 There are a few more random pictures below. Yes, she weighs more than the cat now. She loves him and tries to grab at his hair, ears, or whiskers any chance she gets. 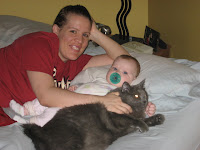 The hat she is wearing is a Coyotes one. I don't know if you'll be able to tell but she has a rash in this picture. She had a cold that gave her a rash. It didn't bother her, but it didn't look very good. She is a member of Howler's Kids Club (Howler is the Coyotes' mascot) and the hat is one of many goodies that she received when she enrolled. John did manage to get a picture of her with one of his Cowboys hats on her head. There is no way I will put that up for everyone to see. It's awful. 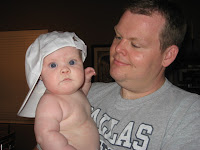 Yes, they are both asleep. 'Nuff said. 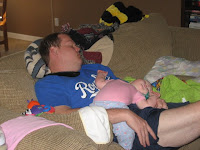 I LOVE YOUR HAIR BECKY! And OH MY - that outfit Livi wore to the party is too cute! She's so feminine in her dress and headband! She is the gal after my dreams! Yep, I'm in love and proud of it!

The pictures of Olivia just get cuter and cuter and I love the new haircut! Hope you are having a good week.

I dig your hair! So cute!

I love your haircut! Cindy

I LOVE the 'Michelin Baby' picture!! SO cute! I had so many rolls when I was 6 months that my parents called me 'Buddha'- just wait until she starts running around the house. Those cute baby rolls will be long gone!