I really only have one answer. You know your child is big for her age when . . . she weighs as much or more than her 13 month old cousin. Yes, it's true. Olivia, at almost 6 months, weighs the same as Ellie, at 13 months. O had to go to the doctor, again, last Tuesday and weighed in at 21 1/2 pounds. She was also diagnosed with another ear infection. I just knew something was up when the cough from her latest cold went away but then came back with a vengeance on Monday night. So she is on another round of antibiotics and I don't know if they are really helping that much because her cough doesn't seem to be improving. We have her 6 month check-up on Friday, so we'll see then.

Thanksgiving was very nice. We drove down to Tucson to see Jason, Noel & Ellie, who were visiting Jason's dad. The drive was better than I expected and we had a good time with them. It was just a bonus that I didn't have to cook this year! Normally we spend holidays at home so it was good to do something different. Christmas will be here in sunny Arizona. And we'll probably be wearing shorts like we did last year.

We decorated the house for Christmas this weekend and had some fun with Olivia at the same time. One of my coworkers gave me the headband with the reindeer on them. It didn't bother Olivia at all to have them on. She liked the tree too. Check out the double chin (she's bigger than my brother was at 6 months and he was a load!). 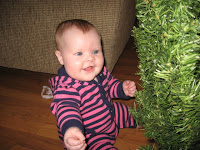 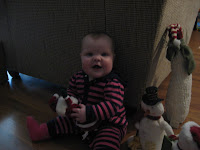 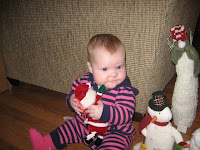 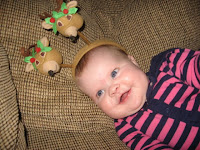 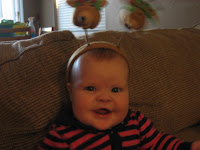 We are getting her 6 month portraits taken on Sunday. It is hard for me to believe that it has been 6 months! She has grown and accomplished so much. According to What to Expect the First Year she is right on track developmentally. She is now "scooting" as her form of transportation. She scoots on her butt in order to get closer to things she wants. It's pretty interesting to watch her bend her legs to push herself places. She can stand up with help and she kind of makes the motions of crawling. I don't know how close she is to that yet. I think she weighs herself down too much. We can't decide if she is going to be blond or redheaded. Her hair and eyelashes change with the light. Her hair is coming in a lot thicker so hopefully we will be able to tell soon. Her eyes have remained very blue and I am becoming more and more hopeful that they are going to stay this color. Yay! She is so happy all the time - unless she is hungry or tired. We tried giving her some sweet potatoes on Saturday and Sunday and that didn't really go over well. She pretty much gagged the entire time. I don't think she swallowed any of it. So tonight I am going to try to mix it in her rice cereal and see what happens. Next up will be carrots and squash.
Posted by J, B, O, J & Z at 8:28 PM

Becky, I am interested to know if you are going to follow in your Mom's shoes and make Olivia (and her friends) take at least one bite of everything they don't like? Remember Kelley and the pickles? and if I remember correctly I always cut you some slack at our house when it came to Patti's rule that you MUST drink at least a 1/4 cup of milk :-) Cindy

OK O'Hally - we should have a vote on who is the best mom - the one that insisted on a bite of pickle or other veggie for lunch or one that took the girls for ice cream sundaes. Humm ... I have a feeling I would lose that vote! You've always been my idol! :-)
Oh by the way, re: this entry - Livi is just perfect!

Patti, just so you know, my vegetable tolerance has gotten much better. Just last night I had an entire stalk of celery. And although I can't eat pickles, I definitely like relish.

Beck, I really love Olivia's outfit in these photos. Someone with outstanding taste must have gotten that for her...

Kelley, you ate an entire stalk of celery? ... you make me so proud, girl!
One of my big disappointments is that the O'Hallorans left Colorado way too early ... I may have even gotten broccoli and green beans down you with more time! :-)
Livi's outfit IS adorable!!!

Ice cream sundaes for lunch! Patti! Honest! I was just trying to make sure Becky got in her dairy requirement!

Don't worry I just saw my friends baby who is like 19 months, and she is wearing size 6T. Seriously. Her little jeans are rolled up past her knees