Shopping for me? What's that?

I did a little shopping yesterday and realized how much fun it was and how much I missed shopping for myself. I had actually gone in the store to get O some sandals and ended up finding something for myself. Something that I didn't NEED. I can't remember the last time that I did that. Shopping has taken on a whole different meaning for me now that O is here. It's not about what I want anymore. It's about what she needs (or what will look cutest on her). John got me a gift card to Old Navy for my birthday and said I could use it with one stipulation: that I spend every last cent of it on me. I promised I would do that but it's not going to be easy. I love getting O stuff, and let's be honest, she looks much better in her clothes than I do and that makes it easier. I'd rather she have the cool clothes, shoes and accessories. I don't mind shopping at Goodwill for myself as long as she has what she needs and wants.
That being said, I LOVE MY NEW SHOES! I don't know the last time that I bought shoes just because I wanted to. But I am so glad that I did. Here they are: 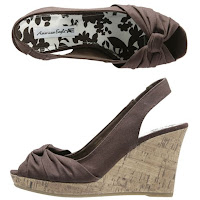 I can wear them with a lot of things because they are a neutral color and will work with skirts, jeans or walking shorts. I am wearing them at work today and they're awesome. Everyone needs to go right out to Payless and get some.
Other than the excitement over new shoes we're still hanging in around here. Last week the bankruptcy judge opened up the Coyotes' auction to bidders looking to relocate the team as well as those wanting to keep the team here in AZ. That makes it all a whole new ball game. On September 2 the judge is supposed to rule on whether Balsillie's bid will be considered since the NHL owners have already voted to not accept him as a team owner. Right now he has the highest bid at $212.5 million. The next closest is $148 million and that's the Reinsdorf group's bid. It's fairly interesting to follow but it's also incredibly frustrating and stressful. Just figure it out already! Is the team going to be moving or not? Is John going to have a job or not? Seriously, how much longer can this go on!? As of right now, September 10th at least.
Posted by J, B, O, J & Z at 4:43 PM