Erin and I went and saw P!NK perform about a week and a half ago and she was awesome! It was a great show. And I do mean a show. There were lights, costumes, props, people flying through the air, and slides. Part of the stage shot out into the middle of the crowd on the floor and that is where she emerged from (through trap doors) to start the show with my favorite song, Bad Influence, off her most recent album. 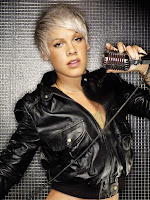 Two things I decided while watching was that I want her body. Talk about solid. And I want her hair. I had actually tried to have it cut like hers a while back and it didn't really turn out like I had hoped. I recently decided that I wanted to try to have longish hair again so I am now growing it out, but seeing Pink in concert may have changed my mind. So, my 4 readers, what do you think? Should I go Pink short?

While I enjoyed the performance one thing that bothered me was the song Mr. President. Not because I disagreed with the message but that it was there at all. Why does there always have to be some political statement made? What made it even more out of place was the fact that the song was directed to G.W. who isn't even in office anymore. I just don't get it. I don't want to hear an artist's political views, whether I agree or not, when I go to be entertained. Just sing your songs.

I know that I am terribly behind on getting updates of O up here. I plan on doing another post this weekend if at all possible. We had O's 15 month check-up last week and she is 32 inches (88th percentile) and 27 lb. 11.5 oz (95th percentile). Her weight has leveled off a bit so I think she may start going down in the percentile rankings. But she is happy and healthy so I am not that worried about it. I just wish she would start saying actual words! I will get more pictures up soon.

As far as John and I we are the same. Really. There is not much happening with us, jobs or otherwise. There still is no decision from the bankruptcy judge as to who won the auction, or if there actually was a winner. Gretzky resigned last week, finally, and the team has a new real-life coach. They open the season on the 3rd with their home opener on the 10th. We are looking forward to being there for the white-out that's planned. They will definitely be playing here for this year so the staff is getting to work making sure everything runs as it always has.

A budget still hasn't passed for the State and it's getting very frustrating. They have actually asked all agencies to do proposals for what would happen should they need to do a 15% decrease or a 20% decrease. I don't know what that means for me. Nothing as of right now, but who knows. I do know a bill was passed a couple of weeks ago that will require all agencies to reduce positions by 5%, effective immediately, to be completed by February. Keep your fingers crossed that it's not me!

Grow it out for the wedding and then get it cut Pink short. That's my opinion.