Olivia and I flew out to Austin late on April 10.  Yes, we were there for one full week and it went incredibly fast.  There was a lot to do so I figured having an extra set of hands there would help Erin out.  On Sunday we did some shopping for picture frames and shoes for my mom (I'll get to that).  We had a nice lunch at Razzoo's as well and despite the rain we got a ton done, including some grocery shopping.

Monday, Tuesday and Wednesday were mainly for running errands and getting all the little things done.  We got the program written, arranged the centerpieces, went to check out the flowers for the cocktail table centerpieces, took O's dress to be hemmed, put welcome bags together, and many other things.  Ryan had his own list of responsibilities including getting his suit pressed and making sure both the front and back yards were presentable for the open house the day after the wedding.  I made dinner on Tuesday for the 4 of us as well as Ryan's best man Bob and his family.  We also managed to make time for some baseball and hockey watching.  Game 1 between the Coyotes and Red Wings was on that Wednesday so we ordered pizza with my parents and Uncle Steve and Aunt Debby and watched the game.  We even saw John on TV during the game!  He was given different seats for the game and was sitting across the aisle from the visitors' penalty box in the second row from the glass.  Not too shabby!  And don't worry, we managed to have some wine or other drinks every night.  I have been detoxing ever since.

John flew out on Thursday morning and I was soooo glad to see him.  It had been a long 4 days of being a single parent and I needed a break.  Unfortunately I didn't get to spend much time with him until the rehearsal and dinner.  The girls went and got their nails done after lunch and going up to the reception site to drop all the decorations off.  Luckily, with such a small wedding party we had a quick and efficient rehearsal enabling us to get over to the dinner before it really got under way. 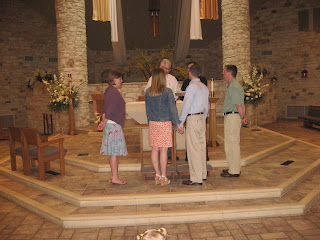 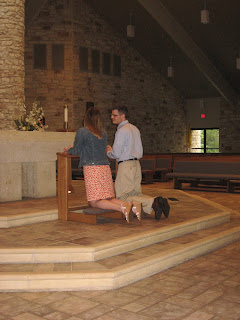 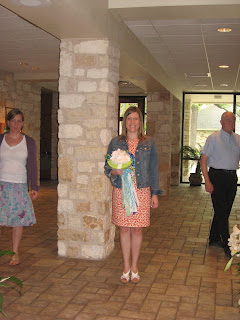 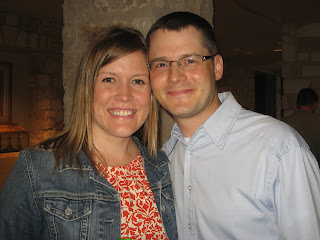 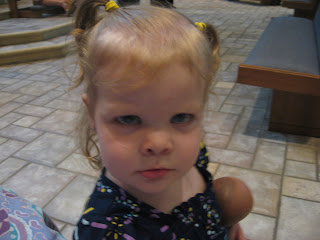 The look on her face cracks me up
The rehearsal dinner was held at Ryan's parent's house and we had Rudy's Bar-B-Q.  It was so good.  I remember having it when we were in town for Thanksgiving and not being overly impressed, but this time they got brisket and chicken but didn't get ribs and it was awesome!  They invited everyone that had RSVP'd yes for the wedding and there were probably 75 people there so there was lots to entertain Olivia and we had a great time.  It was so nice to catch up with lots of people we hadn't seen in a while because I knew that I wouldn't have time at the reception. 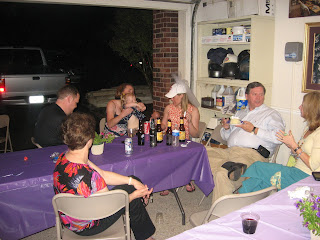 By the middle of the evening the garage door had been opened regardless of the rain, scotch had been lined up and cigars taken out.  The men (and Sue Liguori - the lone woman) enjoyed that.  Shortly before Erin, Jaime and I left (I had a deadline of 10 to be out of there - I take my matron of honor duties seriously), Mike, Ryan's dad, opened his gun vault and the guys were checking them out and putting on holsters.  I guess they never grow out of wanting to be cowboys. 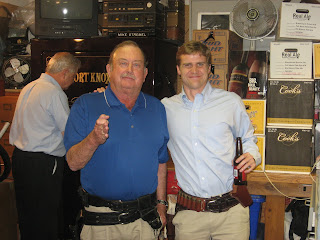 Danny and my dad's best man, Chuck
Erin wanted to be out of there by 10 and we were a little behind schedule when we left at 10:15, but it was plenty of time to get her home so that she could get a good night sleep before the excitement of the next day.
Posted by J, B, O, J & Z at 10:06 PM