It's Hard to Believe

It is hard for me to believe that my babies are 4 months old.  Yes, they are 1/3 of the way through their first year.  This makes me sad some days because I know they are my last children but most of the time I am so happy that they are getting bigger and more interactive with us.  I neglected to put up a 3 month post so here are some pictures that I took at 3 months.  I don't have official weights or lengths but I think Zach was around 14 1/2 pounds and Jake was close to 16 pounds. 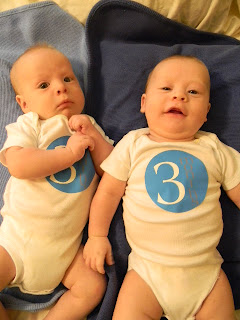 Uncle Danny was able to make it out for a quick visit and Olivia had a ton of fun with him.  They bonded over jumping on the bed and decorating her brothers with stickers.  Now, if only I could have gotten him to get up with the boys at night it would have been a perfect visit! 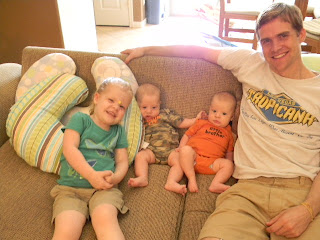 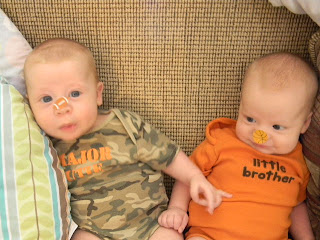 They are both really happy boys. Jake, in particular, wakes up with a huge smile on his face which sticks around most of the day as long as he is fed and gets adequate sleep.  For a stretch both boys slept through the night (7:30 to approximately 5ish) but now Jake is getting up at 3:30 which I suppose is better than 1 or 2.  He is usually up for good at about 6 or 6:30.  Zach, on the other hand, is getting up around 5 to eat and then wants to stay up.  Not fun.  He'll usually go back to sleep around 6:30 when Jake is getting up.  They have impeccable timing.
Both boys are still eating a ton but luckily I am still keeping up.  In fact, after having to defrost about 1 bag a day for about a week and a half after a clogged duct about a month and a half ago, I've actually been able to freeze a bunch more milk in the last couple of weeks.  I am so glad that I have been able to exclusively give them breastmilk though we do cheat and put some rice cereal in their bedtime bottles.  I think it helps Zach more than Jake.
I won't have their heights and weights until the end of next week at their check-up but here are some things they are doing.  At 4 months both boys are getting used to the Bumbo chair as they practice sitting up on their own.  We attempted giving both boys some rice cereal over the weekend without success.  Zach about gagged and Jake started screaming.  We'll try again in a few weeks but at least we have video to blackmail them in the future.
Jake is blowing raspberries and talking up a storm both to himself and to others.  He's becoming very proficient at reaching out and grabbing at the toys that hang on the toy bar on his bouncy chair and he loves grabbing fingers and playing with them.  He has start belly laughing which is the best sound.  He still loves his sister - she was the first thing we ever heard him laugh at - and his pacifier.  Another paci kid.  Great.  You all know how I feel about that but whatever.  He is still the smiley one and is still a mama's boy.  He is a load and when he wants to be held all.the.time. my arms ache.  He has much better control of his head now but is still kind of spastic with his movements.  He scratches his forehead and the back of his head all the time to the point where he has scratch marks and irritated skin even though I keep his fingernails clipped as short as I can.  Jake also loves his baths.  Water in the face doesn't bother him in the least and I think he'd spend a lot more time in the tub if he could.
Zach started blowing raspberries before Jake and will still talk a lot but not as much as his brother.  He is kind of laughing but not the belly laugh yet.  He is close though.  Turns out that Z is our thumb sucker.  It has to be his left thumb though.  He has seemed to favor his left side so I'm wondering if he is going to be our southpaw.  He is trying to reach out for stuff but isn't quite there yet but you can see him concentrating so hard on it.  One major physical milestone that he has passed is rolling from front to back.  I walked into their bedroom one morning and he had rolled to his back.  It happened again a couple of nights later and now he does it all the time.  You can tell that he is so proud of himself but it becomes a problem when he pushes himself into a corner of the crib and can't roll out of it so starting the whining and crying for mom and dad (this inevitably happens at the most inopportune time).  He is drooling and gnawing like crazy so I wonder if he is going to be getting a tooth sooner than later.  Plus, he sports a sweet mohawk. 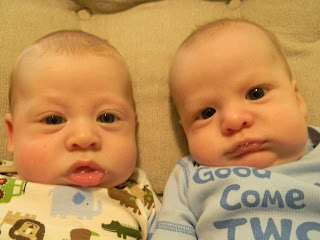