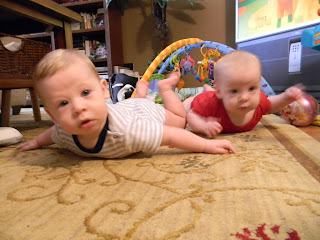 I have officially made it through what most twin moms say is the hardest part.  The first 6 months.  And I have lived to tell all about it!  I'm not gonna lie.  It was tough.  Really tough.  But it has definitely gotten progressively better as the boys have gotten older.  Bedtimes are easier.  They are both pretty good at putting themselves to sleep.  Feedings are going well.  Jake still spits up a lot but they are both really enjoying solids and are taking less breastmilk (I really need to reduce my pump sessions since we're running out of room in the freezer!).
It is tough to go places with them only because of nap schedules.  I have them on two naps a day for sure.  Sometimes it is three if it seems they need one late in the afternoon/early evening.  I don't like to mess with their naps and they like to fall asleep in their carseats so I don't want to take them anywhere during non-nap times so that they don't fall asleep in the car.  It makes getting errands done a little bit harder but we figure it out.  Sam's is our big family trip for the week and we usually do that after their first nap of the day.
At their 6 month check-up Jake weighed 18 lb 8 oz and was 28.5 inches tall.  His nickname is "Smash" because he just bangs around everything we give him and when we put him in the Exersaucer he bounces around it like a pinball.  The other day he pulled over one of our fake trees on top of himself and thought it was funny.  He's that kid.  But he's incredibly sweet and still a mama's boy.  He will wrap his arms around my neck and give "Jakey kisses" as I've deemed them.  Big open mouth on the cheek.  I love them!  He's an awesome sitter and is all over his crib and the floor trying to roll away.  We'll have to keep an eye on this one. 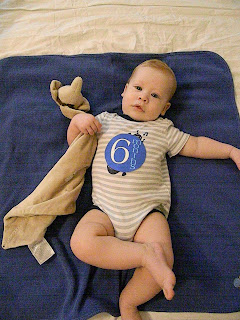 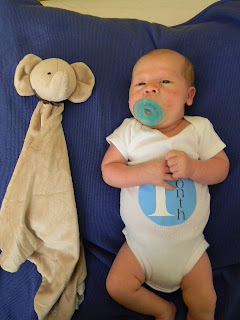 He doesn't look so much like an old man anymore! 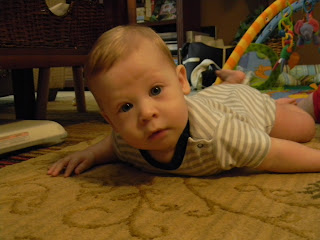 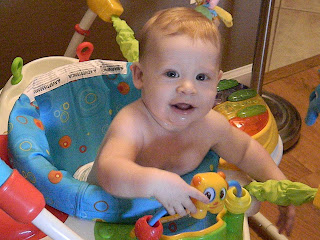 Zach is a big boy as well.  Catching up to his brother but still smaller at 16 lbs 14 oz and 27.5 inches.  He is our thinker and could be more of the bully between the two.  He'll take Jake's pacifier from him (I think he does it because he can) and other things to get under Jake's skin.  It's pretty funny.  He is a lot more vocal on a regular basis than his brother (though the volume is a little lower).  He seems to enjoy experimenting with his voice and different sounds.  He isn't crawling yet but it won't be long.  He can get up on his knees and hands and sometimes rock but he isn't quite there.  We're in trouble when these two get mobile. 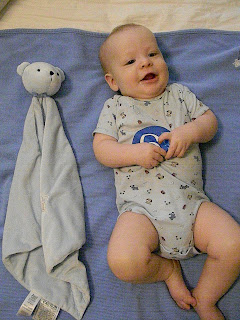 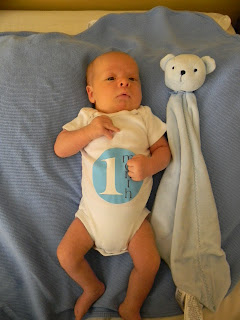 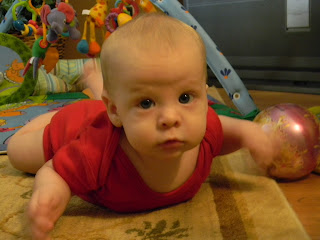 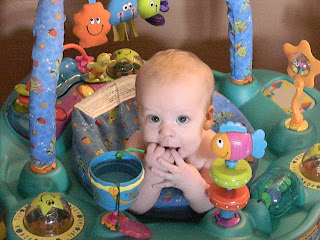 ﻿﻿ I got a text from our day care provider yesterday and it appears that the boys had their first fight.  I guess Zach pulled Jake's ear, so Jake pulled Zach's hair.  They had to be separated.  =)  Not surprising that Zach started it.  Though just this morning Jake was rolled over almost on top of Zach and was trying to gnaw on his arm.  No telling with these guys! 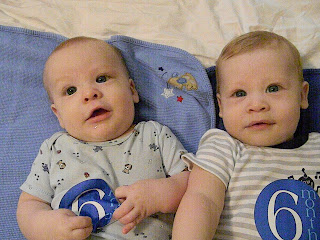 Liv wanted in on the pictures too. 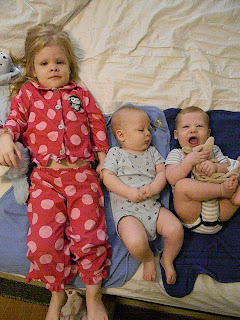 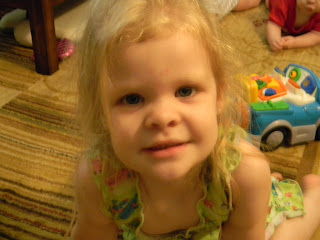 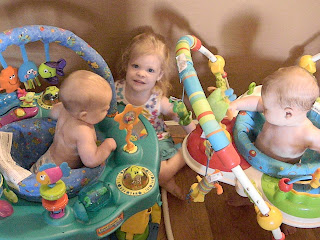 OK, so they are the cutest in the world. ALL three! I laughed when you commented that the toughest time is over. Hee heee heee ... just wait! :-)