One of my very best friends, JB, is pregnant with her first child.  Instead of going to one of her showers, one of my other best friends, Sara, and I decided with JB that we should meet up for a girls' weekend.  We narrowed it down to NYC, Chicago or Boston and since the Red Sox were in town the weekend we were meeting we decided to go there.  It's too bad you can't predict accurate weather forecasts 2 months in advance. 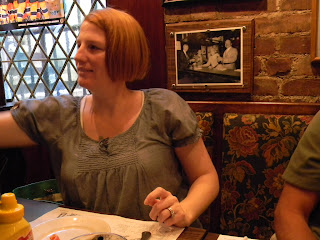 Our trip was Hurricane Irene weekend.  Lovely.  Of course, we didn't care.  It ended up being a non-issue other than the fact that our flights were cancelled (mine for 2 days) and we had to spend some extra time in Boston.  I just felt so bad that I was gone for a couple extra nights and that my dad had to stick around for 2 extra days to help John out with the kids (my mom had to leave Monday so it was just John and my dad for 2 nights but they did great!).

I will just say that I LOVE Boston.  It is one of my favorite cities.  It is totally walkable and the public transportation system is so easy to use.

I was the first to arrive on Friday morning.  I had taken the red-eye in and got there at about 6:30 a.m.  I grabbed my bag and took the T to our hotel, the Boston Park Plaza (highly recommended!), in the Back Bay area of Boston and just about a block from Boston Common.  It is on the registry of historic hotels.  Luckily they were able to get me into a room right away so that I could rest for a little bit before I met my Aunt Robin for breakfast at one of the hotel's restaurants.  It was great to see my aunt and I of course showed her pictures of the boys and Olivia.  We talked about my cousins, one of which had just deployed to Afghanistan, and my uncle who was trying to get back from Nigeria before Irene hit.  It was really nice to sit and chat because we don't see them that often. 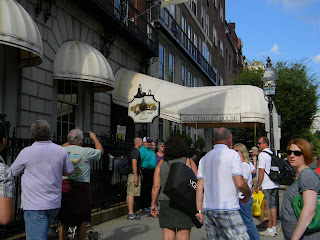 JB and Sara arrived early afternoon, as did JB's parents.  Our first stop was happy hour at the original Cheers bar.  We had some beers and appetizers before heading out toward the North End, also known as the Little Italy section of Boston.  It was a bit of a walk but it was a really nice evening.  I didn't get any pictures unfortunately.  Sorry!

We had gotten some recommendations for restaurants and pastry places.  It was a feast weekend and there were a ton of people on the streets.  We walked through a cool little farmer's market with some beautiful produce and eventually stopped at Modern Pastry where I picked up a cannoli and another chocolate peanut bar torrone.  My aunt had said that if there wasn't a line at one of the pastry places to take advantage and go in.  So I did.

We went to a restaurant called Ristorante Fiore for dinner and while we were eating a marching band walked down the street in front of our restaurant.  Totally random but I had been warned that this might happen.  Sara and I had the Bombolotti al Forno.  It was so good! 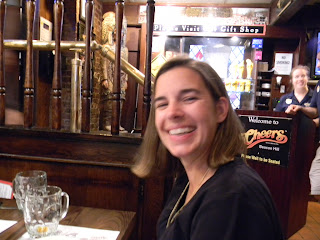 After dinner we walked a little bit further down Hanover Street and came across Mike's Pastry.  This place had a line but we braved it anyway.  There was a sign that said that there wasn't a single file line and to please just move up to the next available service person.  It didn't take long to get up there and have to make a very difficult decision.  What to get!  They had probably 2 dozen or more types of cannolis and as many different types of cookies with some cheesecake thrown in there for good measure.  I ordered the amaretto cannoli.

Yes, I got 2 cannolis.  No, I didn't eat both of them that night.  But in case anyone is wondering I liked the Mike's Pastry one better though both were really good.

It was getting late at this point so we jumped on the T back to our hotel.  I was seriously looking forward to a night of uninterrupted sleep on a comfortable bed!
Posted by J, B, O, J & Z at 9:53 AM

I would have seen no problem eating 2 cannolis in one night. I mean, it's vacation! Live it up! ;-)

JB looks ADORABLE! :-) Sara is beautiful herself! I'm so happy you girls had that time.