Once again it is time to write the monthly update.  Where does the time go?!  All of us are doing well.  The boys continue to grow like weeds and would probably eat weeds if they could get their hands on them.  I took them in for their first flu shots but since I was by myself the nurse didn't bother with taking them out of their car seats to weigh them, so I don't know how big they are other than that they are BIG.  We'll know more next month at their 9 month well-baby appointment.
I have had to modify my photos of them because they are all over the place and don't want to sit still so I figured a chair might keep them in one place for a minute or two.
WRONG.
After these pictures of Jake he went headfirst off the chair and as I grabbed him he flipped over onto my lap.  Sigh.  I guess we should get used to them tumbling headfirst over things. 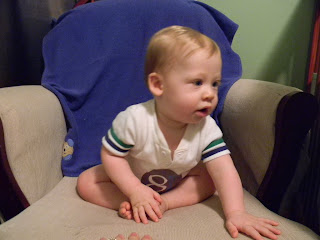 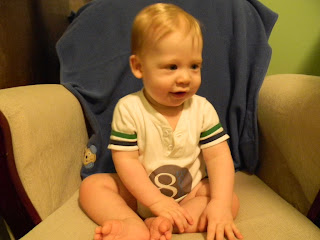 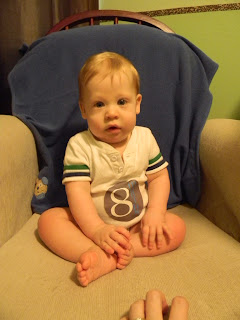 Jake has mastered the traditional hands and knees crawl.  He's not super fast yet but he's getting there.  We recently had to get rid of our plants because both he and Zach were pulling them over on a regular basis.  He also pulled a wine bottle out of our rack.  We never really had to worry that much about things like that with Olivia but with these two we need eyes in the back of our heads.  He's also figured out how to get into a sitting position from his crawl and can pull himself up to his knees.  It's pretty funny to walk in to their bedroom and see these two hands and a couple of eyes peeking over the top of the crib at you.  Even if it is at 4 in the morning.

While Jake is our charmer he can also be very anxious.  We went to the Coyotes' home opener on Saturday and he did not like the noise.  When the Coyotes score there is a very loud horn that sounds and he screamed each time it went off.  Luckily, we were in the club at the arena and I could take them away from the main crowd.  That seemed to help.  As did all John's female coworkers coming by and fawning on him.  He's such a flirt.
Zach is also crawling but he is still mainly an army crawler.  He hasn't figured out how to get himself into a seated position from his hands and knees but he can pull himself up to a standing position.  How is it even possible that my babies are big enough to do that?!  Ugh.  Zach is really turning into a mama's boy.  He loves to cuddle and climb.  He particularly enjoyed the hockey game.  It really looked like he was watching the action.  He and Olivia are going to bond over the sport because she loves it too!  Z is still my good sleeper at night but once he is ready to get up it is hard to trick him into going back to sleep like we sometimes can with Jake and his pacifier.

I couldn't decide on which pictures to eliminate so I just left most of them in.  They are so Zach. 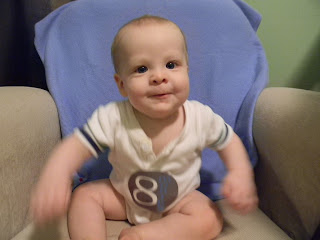 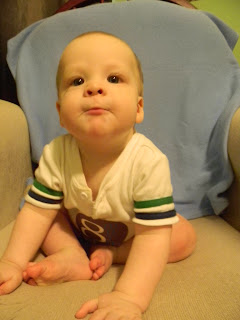 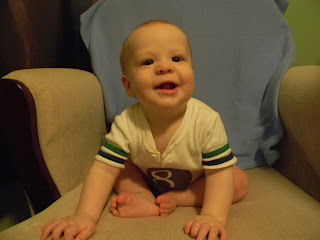 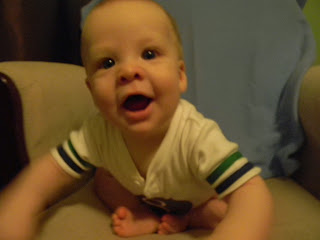 Here are a few of them together.  I love this first one. 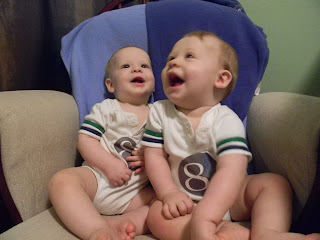 Zach was in quite a mood so I got some more of him.  Olivia wanted in on them too but she wasn't wearing any clothes so I didn't get that many with her. 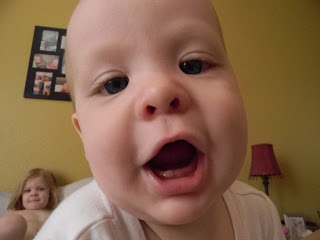